A Piece of History Comes Down 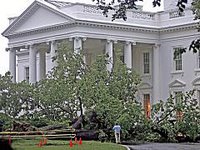 Rain has fallen steadily for most of the past week at Kiko's House and vicinity, triggering violent thunderstorms that topped off a chimney a couple blocks away and has caused widespread damage and flooding in the Northeast U.S.

Among the storm casualties is a large American Elm that has stood in front of the White House since Andrew Johnson was president and is prominently featured in the far right corner of the back of the $20 bill.

No word on whether the greenback will now have to be redesigned.
Posted by Shaun Mullen at 3:48 AM
Email ThisBlogThis!Share to TwitterShare to FacebookShare to Pinterest