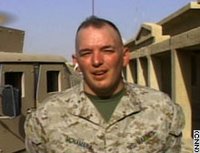 A Marine Reserve major campaigning from Iraq has won a seat on the Grand Forks, North Dakota, City Council.

Mike McNamara beat four other candidates with 49 percent of the vote after his family stumped for him and he answered voters' questions by e-mail.

McNamara, 48, son of former Boston Red Sox manager John McNamara, is not affiliated with a political party. He has served 15 months in two tours of duty in Iraq and will take part in council meetings via speakerphone until he returns to North Dakota in about 90 days.

Let's hope so.
Posted by Shaun Mullen at 4:15 AM
Email ThisBlogThis!Share to TwitterShare to FacebookShare to Pinterest