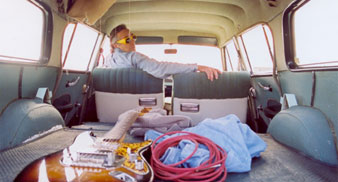 The Ry Guy off in search of the world's music.
Good music gets a whole lot gooder when it can be shared.

In that spirit, here are the five marvelous disks currently in the CD changer at Kiko’s House, including three by or inspired by Ryland "Ry" Cooder, the great American folk musician and musicologist. Four of the five disks are still in print in the U.S. and some are available on the cheap from the usual online retail suspects like Amazon.

(Meanwhile, drop us a line and let us know what you're listening to, especially new stuff that might have escaped our middle-aged ears.)

We'll do the Cooder picks first and then a couple of others:


Cooder has had a second career recording musicians far from the American mainstream. His best known "discovery" is the Buena Vista Social Club, a group of veteran Cuban son musicians who faded from the scene when Fidel Castro came to power because their music was politically incorrect.

Son combines elements of Spanish canción with African rhythms. The result is a kind of hushed romanticism played to beautiful effect on this album by an ensemble of elderly musicians, including Reuben Gonzalez, who had not put his arthritic fingers to the piano keyboard for many years until Cooder came along. I had the pleasure of twice seeing Buena Vista Social Club and would highly recommend Wim Wender's documentary on Cooder and the band.


INTO THE PURPLE VALLEY (Ry Cooder)

This delightful folk album was my mid-1970s introduction to Cooder, then a much in demand session guitarist.

Cooder covers an eclectric range of musicians, including Leadbelly and Johnny Cash. No one would accuse him of having a great voice, but he does play great slide guitar. "FDR in Trinidad" is my favorite cut.

This album was a real eye opener in that I hadn't realized how deep the connection between African music and American blues runs. Ali Farka Toure, the masterful singer-guitarist from Mali, even sounds a lot like John Lee Hooker. (Or is it the other way around?)

Cooper and Toure play off of one another to great effect on the extended trance-like cuts on "Talking Timbuktu," which has been a late-night favorite for years.

Brian Auger's jazz-suffused Oblivion Express with vocalist Julie Discoll did some great stuff in the 1970s but never got their due. This album (sans Discoll) was recorded live at the Whiskey Au Go Go in Los Angeles and rocks hard.

The first and last tracks -- covers of Herbie Hancock's "Maiden Voyage" and Les McCann's "Compared to What" -- are notable. (Notable also: This album is out of print in the U.S.)

This album was a personal project of Marvin Gaye's and recorded without the approval of the executives at Motown, who didn't want to release it. The rest, as they say, is history and "What's Going On" blazed a trail for other black artists like Stevie Wonder and Curtis Mayfield to take more responsibility for their music.

There isn't a weak cut on the album and the title track -- written by Gaye upon his brother's return from Vietnam -- is one of the most powerful examples of social commentary in the genre. Gaye himself was a mess (check out a biography of him at next month's Kiko's House Book Club meeting), but "What's Going On" sounds as fresh and relevant today as it did in 1971.
PREVIOUS KIKO'S HOUSE DISK PICKS

Posted by Shaun Mullen at 3:06 AM
Email ThisBlogThis!Share to TwitterShare to FacebookShare to Pinterest