An Interstate State of Mind 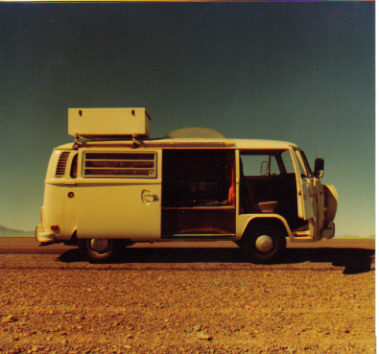 Kiko's House at White Sands, New Mexico, May 1976
While most of my friends were buying houses and raising families in the 1970's, I was seeing the U.S.A. in a Volkswagen bus.

I had globetrotted in previous years and realized upon my homecoming that I knew more about the Far East than East L.A., so I set out on a year on, year off exploration of the contiguous 48 states.

I'd seen Hawaii and Alaska traveling to and from Japan, and except for Kentucky and Montana, ended up driving through the other 46 states courtesy of the marvelous Interstate Highway System, which celebrates its 50th anniversary today.

The system was the brainchild of President Eisenhower, who argued that the U.S. needed a first-rate national road system for military transportation in the event of war with the Soviet Union.

War never came, of course, but the system -- officially known as The Dwight D. Eisenhower National System of Interstate and Defense Highways -- kept growing and today includes 47,000 miles of highway, 14,750 interchanges, 55,500 bridges and 104 tunnels. But no traffic lights.

The interstates' impact on America -- and my peripatetic travels -- was profound.

From the interstates grew suburbs, service stations, motels and strip malls, not to mention the recreational vehicle and O.J. Simpson low-speed police chase.

There also have been downsides:

It could mean a death sentence for a rural burg if the interstate passed it by, most famously the necklace of towns along legendary U.S. Route 66 from Chicago to Los Angeles. The highways were nearly a death blow for America's decrepit public transportation system. Gridlock entered the nation's vocabulary and stayed. And all those service stations, motels and strip malls are not exactly eye candy.

All that said, I have many fond memories of my travels on America's interstates, and most especially on the highways and byways and interesting places and people that the interstates took me to. Here are a few:

Waking in a sleeping bag at the edge of a pasture off of I-80 near Rock Springs, Wyoming and drowsily realizing that I was being watched. By 10 or so curious wild horses that had surrounded my van.

Sitting out a rainstorm in the Florida Everglades near the southern terminus of I-75 where I watched a hawk get blown from a fence post in gale force winds. The magnificent bird looked around to make sure no other creature had seen his un-raptor-like goof and then flapped back up onto the post.

Cresting the last hill on I-80 on a beautiful August morning and seeing the fog-drapped vistas of Oakland and San Francisco emerge as Seals & Crofts' "Summer Breeze" came on my radio.

Coming around a bend on a mountain pass road off of I-25 in southeast Colorado and coming upon a herd of real cattle being driven to their summer grazing range by real cowboys on real horses -- and a single Honda ATV.

Sitting at the same spot for five and a half hours in a blizzard on I-95 in Chester, Pennsylvania. Boy was I glad that I had started my drive with a full fuel tank.

Having my driver's side mirror sheared off by a low flying crow part way down a long downhill run on I-84 near the Idaho-Oregon state line, finally breaking to a stop and walking a good half mile back uphill where the only sign of the bird were scattered feathers. I never did find the mirror.

Breaking down on I-40 outside of Nashville and coasting off the highway, through an interchange and into the parking lot of an auto parts store where I was able to swap out a bum spark plug and was on the road again in less than an hour.

Leaving I-90 and driving into a South Dakota a hamlet (whose name I have forgotten) with an unpaved main street and but a single business, a rundown cafe where I had the most delicious apple pie a la mode that I've ever tasted. The check, with a cup of coffe and refills, came to 50 cents.

Picking up a hitchhiking teen and his border collie on I-80 at State Line, Nevada who told me a couple hundred miles on that he was running away from home and this was the first time in his life that he had left town. I later stopped for gas in Winnemucca and told him to call home. He did and arranged for his mother to come get he and his dog at the local sheriff's office.

Hurtling down I-25 in New Mexico and, aware that I could see a car-free 10 miles or so ahead, stepping on the gas and briefly hitting 125 miles an hour. (No I wasn't in my van.)

Stopping for the night off of I-81 near Woodstock, New York where the temperature hit 35 degrees Fahrenheit below zero.

Leaving I-25 and driving into Rifle, Colorado as the temperature hit 120 degrees, and later finding an exquisite waterful tucked into a small canyon where I was able to cool down.

Having a lady toll collector on I-70 near Lawrence, Kansas make google eyes and proposition me as I paid her. I declined.

Driving from Portland, Oregon to Delaware on various interstates on a 36 hour, 3,250 mile sprint with stops only for gas and bathroom breaks.

Seeing lightning strike and raise an enormous cloud of sand and debris a mere quarter mile or so from my van as I crossed the Bonneville Salt Flats on I-80 in Utah.

Binoculars at hand, watching a magnificent condor alight in the top branches of a Ponderosa pine above a rest area on I-5 near Santa Clarita in Southern California.

Spacing out in the heat later on the same trip and leaving my wallet atop a gas station vending machine off of I-5 near Coalinga in Central California, driving another 100 miles before realizing what I had done, backtracking and recovering my wallet.

Taking a slow-motion, dawn-to-dusk detour on unpaved, deeply rutted and totally unmarked back roads from I-80 in Wyoming south into northwestern Colorado and seeing no sign of human habitation other than three mailboxes for the entire 80-mile trip. As well as one of the most beautiful sunsets in my memory.

Getting busted for possession of illegal fireworks at a speed trap on I-95 near Brunswick, Georgia.

Being waved off of I-10 west of Yuma, Arizona by a California Highway Patrol officer because of dangerously high desert winds and spending the evening taking turns buying rounds of beers, swapping stories and dancing with a delightful group of stranger ranging from over the road truckers to bikers to vacationing retirees at a roadhouse with a bar covered with embedded silver dollars and a honky-tonk jukebox with songs to die for.

PIMPING MY RIDE
Most of my interstate travels were in the stock 1975 Volkswagen Kombi pictured above.

These modifications were made: I stripped out the interior from the front seats on back, built a curtained bulkhead of Philippine mahoghany and a new floor 15 inches above the existing floor with built-in storage bins. The face of the raised section, seen through the open sliding door, was covered in a black walnut laminate from a tree felled in an electrical storm at the farm where I lived in Chester County, Pennsylvania. I made the rooftop storage box of reinforced plywood.

The coup de grasse was a custom-made Plexiglas roof bubble which I designed and had made for a ridiculously low price by a fellow near Woodstock, New York who fabricated cockpit canopies for racing planes in his ranch house basement. Finally, I swapped out the stock side view mirrors for oversized truck mirrors, one of which departed with that crow.

The Kombi lived a long and interesting life, which ended just short of 180,000 miles in typical fashion for VW buses of that era: The engine blew up.
Posted by Shaun Mullen at 4:05 AM
Email ThisBlogThis!Share to TwitterShare to FacebookShare to Pinterest

The number of bridges stopped me, too. But I did a fair amount of research from multiple sources and the 55,500 number checks out.

Here's what I think accounts for the high number: Counting any section of highway that is above ground level, which includes interchanges with tiered highways, viaducts, and so on.

I can drive roughly 10 miles of interstate near Kiko's House and count upwards of 30 bridges.

Hope this helps answer your question.

Point taken. I guess it does depend on what you count as a bridge.

But, MAN that's a lot of bridges!