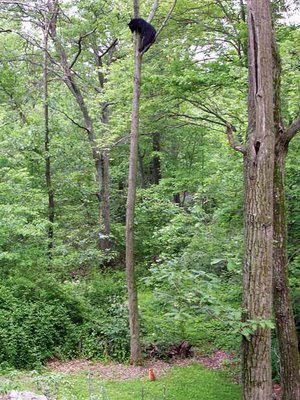 Jack is a seemingly benign looking 10-year-old ginger tomcat who putters around the grounds of his owners house in West Milford, New Jersey.

Jack is declawed and weighs a mere 15 pounds, but that didn't keep him from taking umbrage when a 200-pound black bear wandered out of the woods. He chased the trespasser up a tree and sat hissing at the base for about a half an hour. When the bear tried to escape, he ran him up another tree.

Finally, Jack's owner called him inside and the bear vamoosed.

* * * * *
Would you like your kitty or kitties to be world famous? Send us a photo in the form of a jpg to kikokimba@gmail.com and we'll make that happen.
Posted by Shaun Mullen at 2:44 AM
Email ThisBlogThis!Share to TwitterShare to FacebookShare to Pinterest