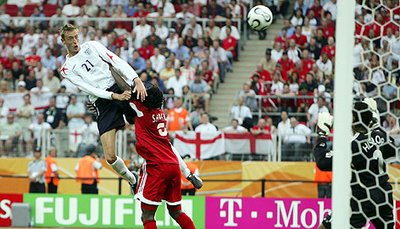 Crouch's header saves England's arse and Michael's hair
I have no special affinity for soccer -- or football or footy as it is known everwhere except the U.S. -- but that changes when the World Cup rolls around.

This quadrennial infatuation was sparked by my late mother of all people. In 1994, she insisted on renting a beach house in June despite my protests that we were likely to get a goodly amount of rain. In fact, it rained every day, leaving Mumsy to worry over whether the stuff in the dishwasher was dirty or clean and my kids and I to watch hours of the World Cup.

Chucking a World Cup Sickie is not an option in the neck of the woods where Kiko's House is located, so this year I again find myself taking lunch there so I can catch a few minutes of the England and Trinidad-Tobago match, or racing home from the mines to see the closing minutes of the Germany-Poland tilt.

If I were England I would be worried. Very worried.

The Brits did not embarrass themselves like the Americans in their 3-nil humiliation at the hands . . . er, feet of the Czech Republic. But eeking out a 2-0 win over Trinidad-Tobago is not a cause for celebration.

The World Cup is great precisely because a wee place like Trinidad-Tobago (population 1 million) can have its moment in the sun. (Remember knocking off France in 2002?)

That moment in the sun is possible because unlike the Olympics, where the bigfoot nations dominate, the World Cup is refreshingly free of the global pecking order.

As well as tape-delayed matches and disruptive TV commercials.

The Dear Friend and Conscience and I watched the U.S.-Czech Republic match with Michael, an English friend and footy fanatic, at a fraternal lodge in a small upstate Pennsylvania burg. The people seated around the bar were besides themselves that they'd have to miss play if they needed to have a tinkle.

I was rooting for the Americans, but was drinking a bladder control Czech pilsner.

The play of most World Cup teams put to shame U.S. pro football elevens and basketball fives where athleticism is everything and there's always the suspicion that the players are doped to high heaven.

I'm talking about teams like Italy, the Czech Republic and Ghana that have athleticism galore, but also that hard-to-define mix of style and creativity.

Then there's the dynasty thing.

I grew up a New York Yankees hater because they so thoroughly dominated baseball in my youth. (FYI, I've mellowed with age and become a Yankees disliker.) Despite the fact that Brazil could take home its sixth trophy since 1930 and third since 1994, I have trouble thinking dynasty.

It is for these reasons and more (I'm still feeling the effects of that pilsner or I'd share them), I consider the World Cup -- and not the Olympics, Super Bowl or misnamed World Series -- to be the greatest sports show on earth.

So who do I want to win?

Here again the beauty of the whole 'arama comes into play: I am not rooting for Brazil. You know, that dynasty thing.

I won't mind seeing England prevail, if only to keep Michael from losing the rest of his hair.

But I would be quite happy -- delirious, in fact -- if any number a dark horse won. Like those Socceroos from Down Under (not a chance, mate) or Mexico (only slightly more likely) or Spain (not impossible.)

Third place to the U.S. team for blaming mix-ups in its signals for its pathetic performance against the Czech Republic. Were it only that simple.

Second place to Italy for blaming rough socks for its scoreless draw with Denmark.

First place to Ukraine defender Vladislav Vashchuk, who blamed his team's humiliating defeat to Spain to the frogs outside the team hotel at a four-star resort near Potsdam. Said Vashchuk:

Because of the frogs' croaking we hardly got a wink of sleep. We all agreed that we would take some sticks and go and hunt them.

I vote for the Czechs!

England all the way.

Brazil over Argentina in overtime in the final.

Brasil by a mile.

England will use to Ecuador on penalties in the second round and Brazil will take it all.