A Setback in Bush's War on Civil Liberties 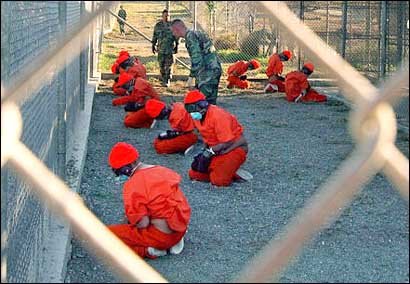 In the latest and biggest reversal of the Bush administration's extralegal tactics in the War on Terror, the U.S. Supreme Court has ruled by a 5-3 margin that the president does not have the legal authority to go forward with military tribunals for detainees at the Guantanámo Bay military prison.

The sweeping rebuke to the administration's aggressive detention and prosecution policies means that officials will either have to come up with new procedures to prosecute so-called enemy combatants awaiting trial, try them by traditional courts martial or in civilian courts where the Rule of Law cannot be so easily ignored.

Perhaps most importantly, the high court held that Common Article 3 of the Geneva Conventions regarding humane treatment applies as a matter of treaty obligation in the War on Terror. This is immense since the Bush administration has used the conventions to wipe its collective ass.

I'm a little shaky on this, but the ruling may also mean that many interrogation techniques that the administation has appoved of, including waterboarding and hypothermia, violate the U.S. War Crimes Act, which states that violations of Common Article 3 are war crimes.

If I'm right, that's enormously significant. It means, by extension, that President Bush and his henchmen are war criminals because they knowingly violated the War Crimes Act and Common Article 3.

Will they be prosecuted for that? No f*cking way.

The test will be to see what the administration does in response to the ruling, which was the biggest challenge of the president war powers since the 9/11 attacks and the most important case the high court decided this term.

The court was ruling on the case of Ahmed Salim Hamdan, Osama bin Laden's driver and Yemeni native captured in Afghanistan in 2001 shortly after the 9/11. He is accused of conspiracy, which his lawyers say is not an internationally approved charge.

Hamdan's lawyers argued that President Bush exceeded his authority by setting up military commissions to try terrorist suspects, whom the administration terms enemy combatants rather than prisoners of war. The term has meant that the suspects do not have the rights traditonally afforded prisoners of war as outlined in the Geneva Conventions.

Three issues were before the high court: whether the tribunals are a proper exercise of presidential authority; whether detainees facing prosecution have the right to challenge the procedures of those tribunals and their detentions; and whether the Supreme Court even has the jurisdiction to hear such appeals.

THERE'S GREAT MISCHIEF AFOOT
For most Americans, the suspension of civil liberties in the post-9/11 world would seem to be an abstraction -- something that applies only to people like Hamdan and other men with funny headgear and fanatical beliefs who are incarcerated in military lockups around the world.

But as the Bush administration's arguments before the court in Hamdan v. Rumsfeld again revealed, Americans who care about their core freedoms and the future of this great country had better start paying attention because there is great mischief afoot and it will not be easily undone just because George Walker Bush will no longer be president in a few years.

Hamdan was captured by forces in and hustled off to the Navy brig at Guantanámo. At issue is whether the military tribunals created to try him and other alleged terrorists are constitutional because the law passed by Congress authorizing them pretty much suspended all civil liberties, including habeas corpus. That is a writ issued by a judge ordering that a prisoner be brought before the court so it can be determined whether he is being imprisoned lawfully.

Habeas corpus is not some bleeding-heart concept. It is one of the pillars on which the American criminal justice stands and has served the nation well in times of war and peace for over 200 years. This means that habeas corpus is anathema to the Bush administration, which has thumbed its nose at the Rule of Law at at its most fundamental at almost every turn.

WHO'S WHO IN THE ZOO
Justice John Paul Stevens wrote the opinion for the majority. He was joined by fellow liberal Justices Ruth Bader Ginsbeg, David Souter and Stephen Breyer, as well as moderate Justice Anthony M. Kennedy, who has replaced retired Justice Sandra Day O'Connor as the "swing" justice.

Thomas took the unusual step of reading his dissent from the bench, the first time he has done so in his 15 years on the court. He said that the ruling would:

Sorely hamper the president's ability to confront and defeat a new and deadly enemy.

Chief Justice John Roberts did not participate in the case, although he had ruled for the government last year when the case was argued at the appelate level.

President Bush said that his administration would work with Congress to revise its policies, something that it had not seen fit to do when it established the tribunals and neutered the habeas corpus principle.

<>Commander Charles Swift, the Navy lawyer assigned by the military to represent Hamdan, called the ruling:

<>A return to our fundamental values. That return marks a high-water point. It shows that we can't be scared out of who were are, and that's a victory, folks.

To read the full text of the opinions, go here.
Posted by Shaun Mullen at 3:25 AM
Email ThisBlogThis!Share to TwitterShare to FacebookShare to Pinterest