Update on the Miami Errorists 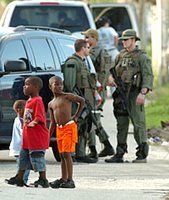 I will open this post by making regretably interconnected points regarding the War on Terror as we slump onward toward the fifth anniversary of the 9/11 attacks:

Any threat to the homeland must be taking seriously.

The Bush administration has squandered all credibility when it comes to protecting the homeland. This includes its ability to ascertain what constitutes a serious threat and when the threat is not serious, nevertheless exaggerate it.

This is why the arrest of the seven wingnuts in Miami who allegedly planned to blow up the Sears Tower in Chicago has been more the stuff of jokes for late-night comedians than an event worthy of multiple Justice Department News conferences, cluck-clucking by Vice President Cheney and endless cable TV news reports.

The proof that the arrests were hyped out of all proportion by the government is the fact that the story had a shelf life of barely 48 hours and had disappeared from TV by the time the Sunday talk shows rolled around.

Squarely on an administration whose priority is paying political dues and not making the homeland safer, including toughening security at ports and chemical plants and cleaning up the mess it made of the Federal Emergency Management Agency.

But about the Miami Seven:

Most of the members of the group had not even bothered to convert to Islam.

It had no weapons or other supplies for its "jihad," so it supplied a government agent posing as an Al Qaeda operative with a list of the stuff it needed, including boots, uniforms, machine guns, radios and vehicles.

Neighbors of the men in Miami's Liberty City said that they made no effort to keep a low profile and stood guard in turbans, dashikis and long robes in a poor neighborhood populated by Haitians and other Caribbean emigrees who wore tropical attire.


These guys didn’t have enough money to get to South Beach. How can you have any credible information that these guys posed any threat to any structure anywhere in Chicago, much less the Sears Tower?

For this to really be a crime, you need an intent plus an act . . . You usually can’t indict and try people for woofing, as you know black men are wont to do, about how mad they are with America. Even if you say you want to blow up the Sears Tower, is there any indication, do you have any possible connection with any possible reality? Unless they have other facts, this just reeks of entrapment.

ZERO CREDIBILITY
At the risk of piling on, I'll share a few words from Roger Cohen of the Washington Post:

This compulsion to exaggerate and lie is so much a part of the Bush administration's DNA that it persists even though it has become counterproductive. For instance, the arrest of the seven suspects in Miami essentially coincided with the revelation by the New York Times that the government has "gained access to financial records from a vast international database and examined banking transactions involving thousands of Americans." Almost instantly, the administration did two things: It confirmed the story and complained about it. The Times account only helped terrorists, Cheney said.

Is he right? I wonder. This is a serious matter. After all, Americans are being asked to surrender a measure of privacy and civil liberties in the fight against terrorism -- essentially the argument Cheney has been making. I for one am willing to make some compromises, but I feel downright foolish doing so if the fruit of the enterprise turns out to be seven hapless idiots who would blow up the Sears Tower, if only they could get to Chicago.

Cheney in particular has zero credibility, but his administration colleagues are not far behind. Prominent among them, of course, is the attorney general, a man so adept at crying wolf and mouthing the administration's line that he simply cannot be believed any more.