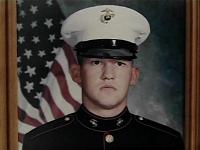 One of the two Marine Corps recruiters shown desperately trying to enlist recruits outside a shopping mall in Michael Moore's "Fahrenheit 911" has been killed in Iraq.

The Marine took four years off from active duty to serve as a recruiter in downtrodden Flint, Michigan, and appeared willingly in "Fahrenheit 911" but hated the results, according to his father.

At one point in the film, Plouhar explains how he approaches the possible recruits:
It’s better to get them when they’re ones and twos. And work on them that way. Right now there is somebody out there who wants to be a Marine but has no idea how to do it.

Plouhar had 38 days left on his tour.
Posted by Shaun Mullen at 3:34 AM
Email ThisBlogThis!Share to TwitterShare to FacebookShare to Pinterest