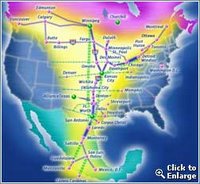 The Bush Administration is quietly advancing a plan to build a huge NAFTA Super Highway through the heart of the U.S. along Interstate 35 from the Mexican border at Laredo, Texas, to the Canadian border north of Duluth, Minnesota, according to a report in Human Events Online.

Human Events, which is well right of center, cuts to the chase:

Once complete, the new road will allow containers from the Far East to enter the United States through the Mexican port of Lazaro Cardenas, bypassing the Longshoreman’s Union in the process. The Mexican trucks, without the involvement of the Teamsters Union, will drive on what will be the nation’s most modern highway straight into the heart of America. The Mexican trucks will cross border in FAST lanes, checked only electronically by the new “SENTRI” system. The first customs stop will be a Mexican customs office in Kansas City, their new Smart Port complex, a facility being built for Mexico at a cost of $3 million to the U.S. taxpayers in Kansas City.

Human Events claims that as incredible as the plan may seem, the first segment of the NAFTA Super Highway is ready to begin construction next year, but the Bush administration is being low key for political reasons. More here.
Posted by Shaun Mullen at 4:01 AM
Email ThisBlogThis!Share to TwitterShare to FacebookShare to Pinterest