Science Saturday I: A Monumental Development 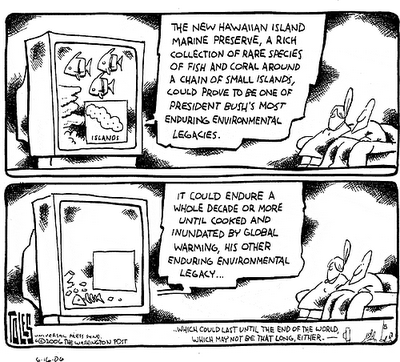 Think of George Bush and the environment is one of the last things that is likely to come to mind, but that changed in a monumental way this week when he announced creation of the world's largest protected marine area -- a 1,200-mile-long chain of small Hawaiian islands and surrounding waters.

The islands are a chain of largely uninhabited atolls, seamounts, reefs and shoals northwest of the big islands. At 140,000 square miles, they are nearly the size of California and home to a staggering 7,000 species of marine life, including endangered green sea turtles and Hawaiian monk seals and millions of breeding seabirds. A quarter of the species are found nowhere else.

Commercial and sports fishing in the area will be phased out over the next five years.
Conservation groups that usually are at odds with the White House are exultant, although they did note that the proposed designation had met with little opposition in Hawaii or Washington and may help the re-election chances of Hawaii's Republican governor.

Jean-Michel Cousteau, the marine explorer and filmmaker, spent five weeks filming in the region and showed the resulting documentary at the White House in April. The film apparently had a powerful effect on Bush and his wife, Laura.

BUILDING ON A LEGACY
The designation builds on the actions of Presidents Theodore Roosevelt and Bill Clinton.

Roosevelt designated much of the island chain a national wildlife refuge, while Clinton issued two executive orders protecting marine resources around the refuge and ordering federal marine agencies to prepare for the marine sanctuary designation put in place by Bush.

the 1906 National Antiquities Act, which gives the president authority to create national monuments to preserve the nation's ancient cultural sites and unusual geological features. In February, he used the law to declare part of the African Burial Ground in a national monument.

IRONY ALERT
In a counterpoint to Bush's designation of the sanctuary, scientists this week said that the Northwestern Hawaiian Islands might be submerged by 2100 because of global warming, something that the president has obstinately refuses to address.

Scientists say Pacific sea levels rose nearly 6 inches around the islands during the 20th century and water levels are expected to rise farther and more quickly this century as global warming continues.
Posted by Shaun Mullen at 3:20 PM
Email ThisBlogThis!Share to TwitterShare to FacebookShare to Pinterest