Part I: Awakening the Democratic Dragon 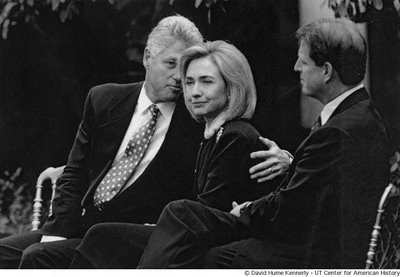 THEY'RE THE PROBLEM, NOT THE SOLUTION
It has become an article of faith in American politics that Democrats generally and liberals specifically are weak on foreign policy and its adopted stepchild, national security. So deep does that view run that many liberal Democrats believe it themselves.

John Kerry certainly did in 2004 by ignoring his own strong foreign policy and national security record and instead running as a hero in a war that had been fought nearly four decades earlier while mumbling that he could do better than George Bush without ever explaining why. The result was a campaign so devoid of fresh thinking and conviction that all that Bush had to do to win a second term was to make it to the finish line without a major blunder.

The perception of the weak Democratic liberal would seem to be borne out by the fact that there have been only two Democratic presidents since Vietnam.

Bill Clinton was more successful but served at a time when foreign policy and national security hardly registered for most voters. Consequently, Clinton is better remembered for an unprecedented economic boom and scandal, of course, than for his intervention in Kosovo, his landmark 1998 Good Friday Accord in Northern Ireland and other successful, if comparatively minor, foreign policy initiatives.

The perception of the weak Democratic liberal is again playing out this election season. Despite their own abysmal record, Republicans are again portraying themselves as the only party that has the moral clarity and vision to act effectively on foreign policy and national security.

Meanwhile, the Democrats babble incoherently that they can do better.

WHEN DEMOCRATS HAD A PULSE
As New Republic editor Peter Beinhart reminds us in his new book, "The Good Fight: Why Liberals -- And Only Liberals -- Can Win the War on Terror and Make America Great Again," the Democrats weren't always so clueless.

I came of age at a time when Republicans, as is the case today, had a monolithic view of foreign policy. The Democrats -- with liberal intellectuals like George Kennan in the van -- had a more nuanced and more proximate view of the world that Alexis de Tocqueville, the great French political thinker, might recognize as what he termed American exceptionalism.

De Tocqueville believed that the U.S. held a special place in the world because of its unique origins, history and political institutions. So did Keenan and Cold War Democrats who thought that there was more to the struggle for supremacy abroad and security at home than merely locking horns with the Soviet Union and Red China.

Their view was that American foreign policy was not the Christianist morality play that was at the core of the Republican foreign policy ethos but a force that was to be used judiciously. And that trying to foster democracy without also fostering economic development was futile.

Then came Vietnam, the Democrats' own version of George Bush's Iraq, and the self-doubt and confusion it spawned.

This eventually led to the ascendency of Ronald Reagan, who become the leading actor in the Republican morality play by making a get tough policy toward the Soviet Union the lynchpin of his foreign policy. Moscow, he declared, was the center of "an evil empire," while the Democratic foreign policy was built on self flagellation and restraint. Although the reality was that the Soviet Union more or less collapsed under its own weight and not because of Reagan, the perception that he and the Republican Party had made the earth move stuck and has been used to great effect by the GOP ever since.

Considering how the Democrats have fouled their own nest, how do they get their groove back?

Second, the Democrats must take a page from the Republican play book and stay on message.

Third, the Democrats must not be afraid to cherry pick from the Republican message, which had much going for it in the abstract but certainly not in the execution. Recall that Bill Clinton was notably succeessful at co-opting the opposition by doing exactly that.

Fourth, an important aspect of that message should be that America has to be as accountable as the regimes that it condemns. By golly, De Tocqueville was right. The U.S. does hold a special place in the world. That means asserting core American values abroad but not abrogating them at home as the Bush administration has repeatedly done. Reconnect voters with the fact that the War on Terror is about protecting the American way. That means valuing the Rule of Law and civil liberties. That means condemning torture, secret prisons and the Bush administration's culture of secrecy. That means embracing democracy abroad, but not through coercion.

Fifth, recognizing that there cannot be political freedom without economc freedom. The Democratic message must stress that homeland security also means economic security. That means undoing a Republican economic policy that has been disastrous to America's middle class and boldly going where no one has dared since Hillary Rodham Clinton's stillborn national health care initiative. It is time for the Democrats to embrace a new national plan based on the Massachusetts model.

Sixth, the heart and soul of the Democratic message must be protecting the homeland by aggressively fighting Islamic militantism. Yes, Democrats respect international institutions like (a reformed) United Nations and NATO, but a Democratic administration must not be afraid to act unilaterally if it is in America's best interests just as Clinton acted in Kosovo before the European community and NATO got on board.

My biggest problem with liberal Democrats is that they have not just appeared weak when it comes to confronting the Islamic jihad, they have been weak. They have not had the courage of conviction to harshly condemn the wrong war -- the war in Iraq -- while vigorously supporting the right war -- the War on Terror.

When that begins to happen, the Democrats will be on the path to true moral clarity and perhaps the White House.

ABOUT THAT MESSENGER
Okay, the Democrats now have a plan, but who is the man -- or woman -- to carry it out?

The short answer is that I don't really know.

The long answer is that it cannot be the usual suspects. That would be John Dean, John Kerry, Al Gore and Hillary Rodham Clinton. Life is full of choices, but these are not the right choices.

So who then? Read the next post to find out.
Posted by Shaun Mullen at 6:15 AM
Email ThisBlogThis!Share to TwitterShare to FacebookShare to Pinterest