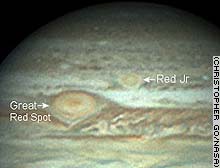 Jupiter's Big Red Spot and Red Junior are about to duke it out for the title of biggest storm in the solar system.

Big Red is twice as large as Earth and hundreds of years old, while Red Junior is only half the size and six years old. Both have ferocious 350 miles per winds.

The storms will make their closest approach on the Fourth of July. Astronomers don't anticipate a head-on collision, although the storms will pass close enough that its not clear what will happen.

Similar approaches in 2002 and 2004 were anti-climactic and both storms survived the meetings unscathed, but Red Junior has morphed from white to red in the last year, a sign that it is intensifying.

The color of the red spots is a mystery. According to one popular theory, the storm dredges up material from deep inside Jupiter's atmosphere, lofting it above the highest clouds where ultraviolet rays from the Sun turn color-changing compounds red.

Posted by Shaun Mullen at 2:31 PM
Email ThisBlogThis!Share to TwitterShare to FacebookShare to Pinterest