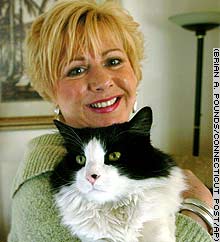 Lewis is a bad kitty!

Lewis has attacked and scratched a half dozen people on Sunset Circle in Fairfield, Connecticut, including an Avon lady, and not even doses of Prozac have slowed him down.

Neighbors wanted Lewis to be euthanized and got police to charge owner Ruth Cisero with reckless endangerment. Judge Patrick Carroll put aside the request to off Lewis and ordered the felonious feline to remain inside her house at all time.

Cisero had rejected a previous offer of accelerated rehabilitation if she agreed to euthanize Lewis. Her record will be expunged if she successfully completes 50 hours of commmunity service and two years of probation.

Judge Carroll said Lewis cannot leave the house, even if he gets out accidentally. He said the case is not about a cat, but about people having the right to live in safety in their neighborhoods.

* * * * *
Would you like your kitty or kitties to be world famous? Send us a photo in the form of a jpg to kikokimba@gmail.com and we'll make that happen.
Posted by Shaun Mullen at 2:04 AM
Email ThisBlogThis!Share to TwitterShare to FacebookShare to Pinterest