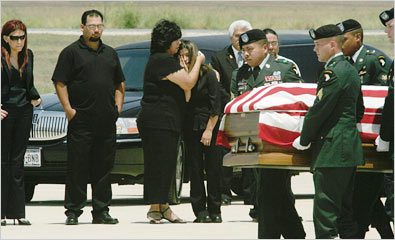 Christian Menchaca, who was ambushed in Iraq, comes home.
It is increasingly evident that the Bush administration and Republicans are stewing in their own juices when it comes to the war in Iraq.

Making, carrying out and defending policy based on politics is always a risky business, but when the politics concern war, the likelihood that events will overtake and eventually undermine policy is great.

No one with an historical perspective -- which war architects Cheney, Rumsfeld and Wolfowitz obviously did not have -- is surprised at where the U.S. is in Iraq four years on.

Let's break all of this down into its component parts:

Making Policy: The Bush administration's justifications for invading Iraq were built on lies. It would only be a matter of time before those lies would be exposed, support for the war would erode and break down along partisan lines.

Carrying Out Policy: As the justifications were undermined, new ones were posited. The invasion went off like clockwork, but hubris was no substitute for a rigorously planned occupation. The result has been a bloody disaster.

Defending Policy: Because the lies were indefensible and the mantra that all was well eventually rang hollow as the bodies and the lies piled up, Republicans had no choice but to take a dog-eared page from the Rove Play Book and characterize Democrats as unpatriotic and even traitorous.

This is the part of the movie where I note that I have no allegiance to the Democrats, who are as big a bunch of unmitigated losers that I've seen in my lifetime.

The Democrats simply have been unable to fashion a saleable anti-Iraq war message that is not co-opted by the clever if duplicitous Republicans. (Meanwhile, why do I agree with John Murtha's message but am tired of hearing him deliver it?)

Add to this fetid gumbo the reality that the Bush administration, so relentlessly able to stay on message for so many years, is at sea regarding how to extricate the U.S. from Iraq without paying the ultimate price.

No, I'm not talking about blood, sweat, tears and the billions that have gone down the sh*thole that is the war. I'm talking about losing political power.

This confusion was evident in back-to-back developments over the weekend: The president stated that the U.S. would not be leaving the war zone until 2009 as a much more ambitious withdrawal plan developed by the U.S. commander in Iraq was leaked to The New York Times.

Gen. George Casey's declaration that significant troop withdrawals could commence in 2007 and be completed by the end of 2008 infuriated Senate Democrats, who had been attacked by Republicans for proposing pretty much the same thing last week during a debate on setting a troop withdrawal timetable.

Can you hear the sound of the teenie weenie violin that I'm playing? Serves the Dems right.

True as this may be, it underlines two big problems for President Bush and his party:

First, they can't keep their story straight because this is still all about retaining power and avoiding accountability. Even the clever Karl Rove finds myself between Iraq and a hard place.

The administration has to figure out how to finesse a phased withdrawal from a country that is doing a pretty fair imitation of imploding into civil war, a country where the government has only a tentative grip on power, its army and police forces are underprepared and often beholden to sectarian interests, Iran is an increasingly influential player and the insurgency shows no sign of being vanquished.

Will the Iraqi government itself provide some cover for Washington? Its new reconciliation plan might. (See my next post for details.)

In any event, the White House has to do something before mid-term elections and time is running out.

That probably means abandoning Iraq through significant troop withdrawals, which would have the effect of making an accountability averse administration accountable for cutting and running from what is, beyond deposing Saddam Hussein, an unmitigated disaster.

Second, no matter what the administration does, its course is fraught with peril.

The White House and Republican and Democratic parties may be confused, but one group is not -- American voters, who by an overwhelming margin are against the war and increasingly in favor of an accelerated troop withdrawal plan.

The ultimate irony of the Bush administration and Republicans stewing in their own juices is this:

Their war policy is by default the glue that is holding Iraq together and the very thing that is tearing it apart.

BASELESS SPECULATION
Then there is the matter of what has been a given from the outset of the war:

That no matter when the U.S. draws down troop levels, it still will want to have a formidable presence in Iraq in the form of one or more large and permanent military bases.

How is that going to go over with, among other groups, the radical Islamists who have emigrated to Iraq in the service of making it an Islamic republic?

Permanent U.S. bases ultimately could be the mother of all sticking points and they're not even on most people's radar.
Posted by Shaun Mullen at 2:19 AM
Email ThisBlogThis!Share to TwitterShare to FacebookShare to Pinterest