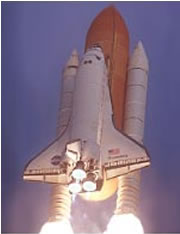 NASA will launch the first space shuttle in more than 12 months despite warnings from the space agency's chief engineer and safety offices that problems remain with the problematic external fuel tank.

The decision to launch Discovery on July 1 on a 13-day trip to the international space station was made after two days of closed meetings by NASA's top managers and engineers at the Kennedy Space Center.

The flight will be the second mission for the now antiquated shuttle program since the disaster in 2003.

The final decision to fly was made by NASA administrator Michael Griffin, who said he would shut down the space shuttle program if another vehicle were lost like space shuttles Challenger and .

Not exactly reassuring, Mr. Griffin, considering that a poll of your top safety officers and engineers recommended against flying until more design changes were made to the external fuel tank.

Despite their recommendations, the dissenting managers did not object to making a launch attempt, NASA officials said.

The rationale was that the astronauts have inspection and repair methods to fix the shuttle and a safe haven at the space station, the tank will be redesigned later and delay might create pressure on schedules in three or four years, said.

The most contentious debate focused on whether the shuttle's external tank should undergo more changes in 34 "ice-frost ramps" -- wedge-shaped brackets that run up and down the tank holding pressurization lines.

About 35 pounds of foam has been removed from an area of the tank where a one pound piece fell off during last July's launch of Discovery.

Representatives from NASA's safety and chief engineer offices said at the meeting that the shuttle should not fly until the ice-frost ramps were redesigned.

A large piece of flying foam from where the external tank connects to the shuttle -- not the ice-frost ramps -- struck a wing of Columbia during its launch in 2003, allowing fiery gases to enter the shuttle and kill the seven-member crew during descent.

Griffin said the decision to fly posed no risk to Discovery's seven astronauts because NASA had devised new inspection and repair techniques for the shuttle, and as a last resort the astronauts could stay at the international space station until a rescue shuttle arrived.

NASA's three shuttles are scheduled to be grounded in 2010, once the international space station is constructed. Postponing the launch past July, might cause schedule pressure in three or four years for completing the space station, said.

The board that investigated the accident said schedule pressure by managers was a contributing factor to the disaster.

I don't want to get us into a situation where by being more cautious than I think technically is necessary today, we wind up having to execute six flights in the last year. That's not smart.

Posted by Shaun Mullen at 4:26 AM
Email ThisBlogThis!Share to TwitterShare to FacebookShare to Pinterest