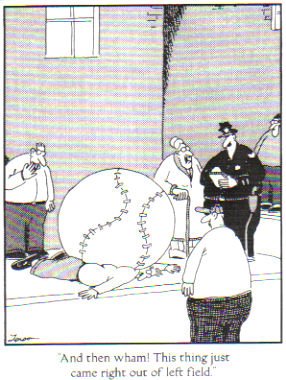 Four years ago today I awoke about 5 in the morning, got out of bed to have a piddle and fell flat on my face. Not the best way to start a beautiful summer day, but I figured that I had a bad leg cramp, which I often did back then, so I picked myself up, turned back in and fell asleep for another couple of hours.

When I awoke again I became aware of what I had only vaguely realized earlier: I was unable to move my left side -- arms and hands and legs and feet. They were paralyzed.

I woke the Dear Friend and Conscience and explained my predicament.

"Oh, you've probably had a stoke," she said matter of factly. The DF&C would know about such things having been a critical care nurse par excellance for many years.

I was not predisposed to stroke, but just like the lady tells the cop the Gary Larson "Far Side" cartoon above, which ironically was the offering on my desk calendar pad the very next day:

And then wham! This thing just came right out of left field.
The DF&C knew from experience that it was past time to rush me to the understaffed local emergency room, which was better able to deal with ski injuries than CVAs. So she weighed my options and decided on driving me to a regional hospital where I was likely to get comprehensive care.

* * * * *
In no time at all, I was being wheeled into the regional hospital's ER where the DF&C talked the talk with the admitting physician. I was whisked through the ER and bedded down in the hospital's Stroke Unit, where I underwent an extensive battery of tests. I began intensive physical and occupational therapy the next morning. It seems that the quicker you can begin PT and OT the better change you have of making a fuller recovery.

I was discharged in only five days and could go back to Kiko's House rather than to an interim residential care facility because I had worked hard to begin my recovery and the staff knew that I had a formidable helpmate in the DF&C. In addition to my PT-OT regimen, she made me swim daily -- or rather an ugly approximation of swimming -- and I was quickly back on my feet.

I discarded my walker in a few days and my cane a few days later. I was driving again in a couple of weeks and by the three-month mark had probably made close to a 90 percent recovery.

I had excellent health insurance, got excellent care, had the support of my family and, of course, the DF&C. I found from all the hospital tests that I was healthier than I had any reason to expect and as a result of an improved post-stroke diet and nutritional supplements I actually feel better and think more clearly than before I went splat. I no longer get leg cramps, as well.

If there's a moral to my story it's that

I took my first tentative bike ride two years ago today and have been a pedaling fool ever since.
Posted by Shaun Mullen at 3:14 AM
Email ThisBlogThis!Share to TwitterShare to FacebookShare to Pinterest

Wow, man, powerful story. And your advice is a good one...get care early...and be near some who knows what that is. A friend's mother had a stroke at home while her dad was outside. By the time he came in from gardening a couple of hours later, she was bad. And he condition was worsened by going to a local hospital that didn't know how to handle it. She ended up with all the yuck...blindness, paralysis, etc. Glad you sound healthy...cheers.