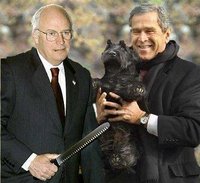 "The One Percent Doctrine," Ron Suskind's new book, may be based on authoritative government sources, but it reads more like a Stephen King horror novel.

The book will be a revelation for the half dozen or so people (you know who you are) who still don't believe that the rationales for the war in Iraq were built on cherry picked intelligence and that the U.S. was and remains unprepared for another terrorist attack.

As for the president himself, Suskind writes that he is:

A weak man bred to believe he is strong and a leader of men. Propelled to success by family and powerful friends, he is granted the world's foremost authority, but his victory is marred by controversy. At first he is insecure about his legitimacy, so he makes no bold moves and vacations at home where he is comfortable. Then, tragedy strikes, a historical moment that sears itself so immediately into the hearts of men that the date is marked forever: September the 11th. The leader asks God's guidance and feels a revelation: this is fate. He has been chosen to lead America and the world in this decisive historical moment. Imbued with a sense of purpose and divine right, not to mention a political landscape in which his word is the nation's command, he prepares to act. But he is still a weak, insecure man at heart, and he puts his faith not just in God, but in his right-hand men-- Cheney, Rumsfeld, Rove. After all, he tells himself, they are also chosen to be in these positions at this time. He trusts them and he trusts their decisions to be the right ones, but in truth it is because he does not trust himself to question their judgments.

So our leader assumes the role of every bad manager -- calling endlessly for unity, for strength and for faith, offering platitudes and placebos with no confidence in his own grasp on the policies that will solve the problem. And the people, rocked to their core by five jetliner-missiles, trust him, need to trust in their leaders. But as time passes, as the hubristic and imperial, aggressive policies of our leader's right-hand men become clear, as it becomes obvious that these men are above governing and providing for the people, We the People begin to see that we have misplaced our trust, twice. Perhaps these leaders are merely incompetent. Perhaps they have a grand agenda they believe is too important to the globe to be bothered with international humility. Whatever the case, our fearful leader can only fumble and obfuscate when a frustrated press and citizenry begin to ask, "What policies are you uniting us behind, exactly?"

And now here we are, having abdicated our Constitutional authority to an executive whose values do not include levelling with the American people, or treating other nations as equally sovereign. Congress festers with corruption and abdicates its oversight duties in the face of the executive's aggression. Judges are accused of "activism" when they exercise their authority as a co-equal branch of government. The party in power is corrupt and beholden to the fundamentalists who secured its voting coalition. The opposition party scrambles for an appropriate vision but cannot seem to cohere or inspire. And We the People do not protest, they do not march, they do not riot to oppose torture in their name, or espionage conducted on them.

* * * * *
John Perry Barlow has had a varied career, to say the least. The Wyoming native worked in Dick Cheney's first congressional campaign. He was a cattle rancher. He wrote songs with the Grateful Dead's Bob Weir. He is co-founder of the Electronic Frontier Foundation and currently a fellow at the Berkman Center for Internet and Society at Harvard Law School.

Barlow also can call 'em ase he sees 'em. Here's his take on the veep:

Cheney's dark intellect has become one of the most dangerous forces in the world; he has become a global sociopath, a creature of enormous power and intellect combined with all the empathy of a HAL 9000 (the murderous computer in Stanley Kubrick's 2001: A Space Odyssey).

Posted by Shaun Mullen at 6:13 AM
Email ThisBlogThis!Share to TwitterShare to FacebookShare to Pinterest