Iraq II: When the Shoe Is On the Other Foot 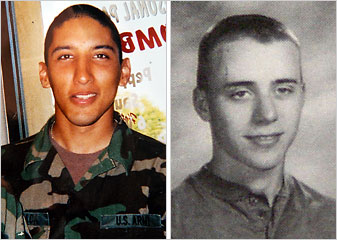 Please pause to take a look at the photos of these young men before reading on. They're Kristian Menchaca (left) and Thomas L. Tucker.

Menchaca hailed from megalopolis Houston, Texas. He was a high school dropout but earned his general equivalency diploma before getting married in January and shipping out to Iraq.

Tucker was a resident of tiny Madras, Oregon. He loved to sing and play the piano.

Look into the eyes of these two shy young men. Then look outside the window wherever you are. Take a deep breath as you look at the trees, the backyard swimming pool or whatever the scene may be. Look hard and take a deep breath, or maybe give your bride a hug, if you have one, or play something on the piano, if you have one. Because Kristian Menchaca and Thomas L. Tucker will never have those opportunities again.

The bodies of Menchaca, 23, and Tucker, 25, both privates first class, were found on Tuesday.

Menchaca, Tucker and Specialist David J. Babineau had been sitting alone in a Humvee when they were attacked by insurgents at their traffic checkpoint in the Sunni stronghold known as The Triangle of Death on the 17th day of the third month of the fourth year of the war in Iraq, the war that President Bush tells is getting better every day. Babineau, 25, of Springfield, Massachusetts, was killed in the attack.

Both Menchaca and Tucker were victms of what Defense Secretary Rumsfeld smugly refers to as "coercive interrogation techniques" when Americans are wielding the whip.

They had been torture and beheaded.

What should the official United States government response be to these acts of savagery? As of 7:30 p.m. EDT, there had been nary a peep from the White House, so how about this:

That's okay. They were only glorified traffic cops. Besides which, we use torture, too.

Perhaps Vice President Cheney, that great champion of torture, can take some time out from duck hunting to invite himself to the homes of the Menchaca and Tucker families and tell them face to face what he repeated this week -- that the Iraqi insurgency is in its "last throes," as he first infamously said in May 2005.

In defending his statement, the always unapologetic Cheney explained that:

If I look back on something that I underestimated, it would be the extent to which that society had been damaged by that series of events that had occurred over 30 years during Saddam's rule.

I sure know that I underestimated -- or misunderestimated, as his boss says -- what a vile person Dick Cheney is.

THE BATTLE OF THE FALSE COMPARISON
Politicians make false comparisons all the time, but the penchant for President Bush's flunkies to compare the war in Iraq and a wee dust-up familiarly known as World War II is not only inane, it dishonors the veterans of that great conflict.

White House mouthpiece Tony Snow was at it the other day in comparing the Mess in Mesopotamia, which as noted is in its fourth year, to the Battle of the Bulge, which lasted six weeks. Sayeth Tony:

The president understands people's impatience — not impatience but how a war can wear on a nation. He understands that. If somebody had taken a poll in the Battle of the Bulge, I dare say people would have said, "Wow, my goodness, what are we doing here?" But you cannot conduct a war based on polls.

But then what the heck, Bush has made it clear that although the war is getting better every day, he's revealing himself as a coward for the ages and dumping the whole fricking mess on a successor. A successor whom I predict will retire the WW2 analogizing as one of his first official acts.
Posted by Shaun Mullen at 4:04 AM
Email ThisBlogThis!Share to TwitterShare to FacebookShare to Pinterest

This goes to the heart of the way you and I each look at the war, and the USA, and they're quite different and irreconcilable. So far, anyway.

In my view, you are quite mistaken to compare the savagery of Iraqi beheaders with American torture, and Rumsfeld, and all the rest. It's appalling that US troops use torture, but it's outside the norm for America. In Iraq, it's well and truly inside the norm, and the death of Zarqawi ought to remind us that you guys have made a little dent in their quaint local customs.

Again, it's by no means absurd to compare the incursion into Iraq with similar battles in WWII. All the same military problems come into play, and you can read any number of histories of that war and see not only similar situations, but even the same words being used about the political hinterland. (For a new example, read "An Army At Dawn" by Rick Atkinson, an account of Operation TORCH.)

I have to say to you that you are, along with your fellow liberals, too impatient. Bush was wrong to say "Mission accomplished!" when he did, and the fact is that every war takes longer than people suppose, and wish. Not even the Six Day War of 1967 is over yet. WWII is commonly described as a continuation of WWI, and it's true. Other examples abound.

What should America do? Keep going. And don't expect anything to change when the Rumsfelds and the Cheneys and the Bushes have departed the scene.

When Iraq is behind us, and Iran and North Korea take over the headlines and the flak of the bloggers, keep in your mind that the people that you (and the Australians and even the occasional Kiwi) are fighting operate under a quite different set of mental assumptions about the world. Were it otherwise the Israel/Palestine dispute would have been over 100 years ago.

To lose this thing is quite unthinkable. The entire future history of the world you and I have inherited and now bequeath is at stake, nothing less. Iraqi butchers will go on bombing their fellow citizens as long as they can, and as long as the Iraqi street allows it. There are tentative signs that the Iraqi street is becoming impatient - which well they might be - and one day, perhaps after you and I are dead, something we recognise as civilisation will break out.

Lots of people tell me I'm an optimist, often against the run of play. Why they make it seem a criticism, I can't fathom!

Thank you for your most thoughtful comments. You are quite right that the way we look at the war and the U.S. are irreconcilable for the time being, but I’ll satisfy myself in correcting you on a couple of key points:

* It is most appropriate to compare the savagery of Al Qaeda with U.S. policy. You are the one who is quite mistaken. We’re not talking about a few bad GI apples. We are talking about an official Pentagon policy, endorsed by Rumsfeld, Cheney and Bush himself that permits torture. If you want to split hairs over bad torture like the U.S. has acknowledged it uses versus the really bad torture that al Qaeda uses, you go right ahead. Whether its submerging an enemy combatant in water or smearing menstrual blood on his chest or what happened to young Menchaca and Tucker, it's all torture.

* The knuckleheads in the Bush administration are comparing all of World War II with all of the war in Iraq, not just a particular WW2 battle. The comparison is inane, inappropriate and deeply offensive.

Like WW2, this war is ostensibly being fought to protect American values. Those values do not include torture, secret prisons, eavesdropping on Americans without their knowledge, abrogating civil liberties and lying.

You're entitled to your optimism. I too believe that the U.S. needs to see the war through to the end, but I am deeply troubled that my country has been hijacked by a rogue presidential administration and 2,500 young men and women have come home in pine boxes because of the wrong war in the wrong place at the wrong time.

We'll have to agree to differ, Shaun, but two things have to be said:

1. Your portrayal of Iraqi and US behaviour as somehow morally equivalent is both false and offensive. (This is the same phenomenon that informs comment on the Israel/Palestine war. My government, among others, thinks blowing up a teenager eating pizza is equivalent to assassinating a murderous terrorist. It's not.)

2. You need to lift your game above hurling insults at all and sundry, as you have done all through your overnight posts. Glenn Reynolds and all the others are just as entitled to their opinions as you are.

Do not put words in my mouth, Mr. Bumpkin. I am not equating what Al Qaeda did with what America does.

Let's cut right to the chase:

How can the U.S. (or any other nation of laws for that matter) claim the moral high ground when it approves the use of torture by its own agents and its commander in chief goes so far as to state without equivocation that he will not abide by a law passed 92-6 by his own Senate outlawing torture?

You have to win, goddamit! No ifs, no buts, no maybes.

It's not whether you're right or I'm right. Or I win or you win.

There are merits to your arguments, but you undercut them when you support a regime that not only condones torture but has rejected its own legislators' efforts to outlaw it. You keep saying that everything will be okey dokey in 5, 10 or 20 years. Is that when there won't be anyone left to behead?