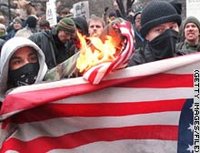 The conservative wing of the Greatest Deliberative Body in the World, the one that has passed not a single piece of legislation of consequence this year, was back to kanoodling its base this week as it took up a proposed constitutional amendment to ban American flag burning.

When was the last time that anyone burned an American flag? Beats me.

The amendment, which fell one vote short of approval, would have overturned a 1989 Supreme Court decision that quite reasonably found that although flag burning is offensive, it is constitutionally protected free speech.

The amendment stood a slightly better chance of passage than other conservative constitutional amendment flops, including the recently deceased same-sex marriage ban, authorizing school prayer, guaranteeing the right to use the word "God" in the Pledge of Allegiance and making English the "official" language.

THE BIG FAT IDIOT IS BUSTED AGAIN
Right-wing radio talk jerk Rush Limbaugh, who villified people with drug problems during his well-publicized series of run-ins with law enforcement over abusing powerful painkillers, is at it again.

Limbaugh was detained for about 3 1/2 hours at Palm Beach International Airport after authorities found a bottle of Viagra in his possession without a prescription.

Limbaugh's lawyer disingenuously claimed that Rush's name wasn't on the bottle to protect his privacy, but the bust could kill a plea deal that he has with prosecutors over the previous run-ins.

More here.
WHAT TOOK SO LONG?
Free speech issues are especially difficult to sort out on college campuses, but University of Colorado Professor Ward Churchill, whose vile comments about 9/11 victims ignited a firestorm of controversy, should have been given the hook long ago.

The university has finally decided to do just that after two investigative committees skirted the free-speech issue but found evidence of serious misconduct in Churchill's record, including plagiarism, misrepresentation of facts and fabrication of scholarly work.

More here.
ANNIE GOT HER GUN
Speaking of 9/11 and free speech, two New Jersey Democratic legislators are pushing to have right-wing sweetheart Ann Coulter's new book banned from bookstores in the state.

Coulter criticizes four activist 9/11 widows known as "the Jersey Girls" in her new bestseller, "Godless: The Church of Liberalism," for being sob sister gold diggers who are cashing in on the tragedy. That criticism is so over the top as to be obsence, but like it or not Coulter has the right to be a toilet mouth just like Americans should have the right to burn their flag.

PIMP HIS RIDE
Governor Ernie Fletcher of Kentucky has been indicted for a variety of corruption-related offenses, but not for hypocrisy, which is an obvious oversight.

You see, the man who touts himself as a steward of the environment in a state with staggering pollution problems and a champion in the fight for fitness in a state rated the "fattest" in the nation, rides to and from work in a Lincoln Town Car each day.

The distance from the governor's mansion to his office -- 150 yards.

DO AS WE SAY NOT AS WE A.C.L.U.
Efforts by the American Civil Liberties Union, that paragon of free speech, to muzzle its own board member continue apace.

Former ACLU board member and free speech champion Nat Hentoff, for one, has had enough.

More here.
Posted by Shaun Mullen at 3:50 AM
Email ThisBlogThis!Share to TwitterShare to FacebookShare to Pinterest