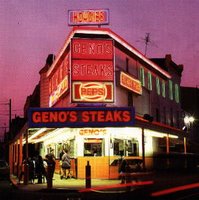 We reported in a post last week about one of the more overt symbols of the racism that all too frequently bubble just below the surface in .

That would be Geno's Steaks, a landmark that requires customers to speak English before they will be served.

The story has gone national (The Wall Street Journal reported that the flap was over a cheesecake store) and now the city’s Human Relations Commission has ordered Geno’s owner, Joey Vento to remove a sign that reads:

This is . When ordering, speak English.

I’m trying to help these people. You teach them how to say 'cheesesteak,' then they go home and learn another word. That’s how every other group [of immigrants] did it.

To take down the sign now, he says, would be an admission that he was wrong. Besides which, his business is booming and line are long with both customers and curiosity seekers.

Well, I know from experience that some Philadelphians have words in their vocabularies beyond "cheesesteak." Words like "arson fire" and "drive-by shooting." It seems like it will be only a matter of time before a hothead does something stoopid that will only get people hurt.

The message that tourists were getting, that other people were getting, from this publicity was, 'In Philadelphia, either speak the language or get out.'

He says his staff will work with the patrons in getting their order no matter what language they speak:

If I was to go to another country where I didn't speak the language, should I be denied service at a restaurant?

Luke says he's thinking about creating an international cheesesteak that you can get anything on. Except tofu. That's where he draws the line.
Posted by Shaun Mullen at 3:23 AM
Email ThisBlogThis!Share to TwitterShare to FacebookShare to Pinterest