Science Saturday I: Earth in the Hot Seat 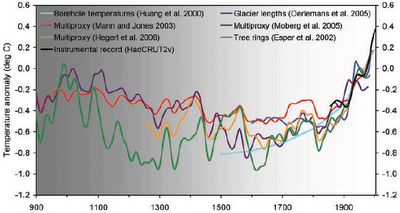 Scientists examined multiple temperature reconstructions
for the past millennium. They were unanimous that temps
have increased at an unprecedented rate since 1900.
There is no question that our planet is warming up. There is a question, I think, as to the primary cause of this warming trend. Is it just another swing of the pendulum from warming to cooling to warming that has been going on for eons? Or are man-made emissions the main culprit?

My answer is that it doesn't really matter. Regardless of whether humans or Mother Nature's pendulum are the primary cause, global warming is a ticking time bomb, to use the overused but effective term.

If the human causes are not confronted sooner than later, it is likely that our children and grandchildren will have to endure an era of unparalleled floods, droughts and epidemics. That may happen anyway, but we don't know if we don't try.

Yet another study, this one the most comprehensive to date, shows that global warming caused by human activities are indeed not a fig newton of the imagination.

A National Academy of Sciences panel concluded after a broad review of scientific work requested by Congress that:

The Earth is the hottest it has been in at least 400 years and potentially the last several millennia and human activities are responsible for much of the recent warming. Average global surface temperatures in the Northern Hemisphere rose about 1 degree during the 20th century.

The 155-page academy report noted that climate scientists Michael Mann, Raymond Bradley and Malcolm Hughes concluded the Northern Hemisphere was the warmest it has been in 2,000 years.

Their research is known as the "hockey-stick" graphic because it compared the sharp curve of the hockey blade to the recent uptick in temperatures and the stick's long shaft to centuries of previous climate stability.

The panel looked at how other scientists reconstructed the Earth's temperatures going back thousands of years before there was data from modern scientific instruments.

For all but the most recent 150 years, the academy scientists relied on "proxy" evidence from tree rings, corals, glaciers and ice cores, cave deposits, ocean and lake sediments, boreholes and other sources. They also examined indirect records such as paintings of glaciers in the Alps.

Combining that information gave the panel "a high level of confidence that the last few decades of the 20th century were warmer than any comparable period in the last 400 years," the academy said.

Overall, the panel agreed that the warming in the last few decades of the 20th century was unprecedented over the last 1,000 years, though relatively warm conditions persisted around the year 1000, followed by a "Little Ice Age" from about 1500 to 1850.

The scientists said they had less confidence in the evidence of temperatures before 1600. But they considered it reliable enough to conclude there were sharp spikes in carbon dioxide and methane, the two major "greenhouse" gases blamed for trapping heat in the atmosphere, beginning in the 20th century, after remaining fairly level for 12,000 years.

The Bush administration has maintained that the threat is not severe enough to warrant new pollution controls that it says would cost 5 million Americans their jobs.

Translation: We're unwilling to spend the political capital to deal with this crisis even if it means letting Planet Earth go to hell.

Posted by Shaun Mullen at 4:30 AM
Email ThisBlogThis!Share to TwitterShare to FacebookShare to Pinterest