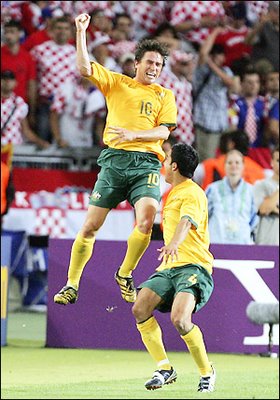 It took the Socceroos 32 years to get back to the World Cup. No wonder they wanted to prolong their stay.

Harry Kewell (above) scored from close range to give Australia a 2-2 draw (there's that word again) with Croatia and send the Aussies into the second round alongside the defending champion Brazil from Group F.

Australia, which entered the cup competition ranked 44th in the world, will face the powerful team from Italy on June 26 in Kaiserslautern.

The match was billed as a clash of loyalties. Seven players of Croatian descent played for Australia, while three Croatian players grew up Down Under. Those ties took a back seat on the field as the players exchanged bone-crunching tackles.

For the entire match it seemed as if the Australians were chasing a victory, battering at the Croatian defense, which looked closer and closer to buckling but kept holding up.

Back in Australia, millions rose before dawn to watch the live broadcast, with crowds of thousands gathering before giant screens in Sydney and Melbourne.

It is a great sporting moment. What is great about this is that for so long we had in Australia hundreds of thousands of young boys, and increasingly girls now, playing soccer, but somehow or other we couldn't break through into the international scene.

For all 's rich sporting history, had it ever witnessed 90 minutes like the 2-2 draw with ?

This was sporting drama of the highest order, quality tinged with incompetence, a compelling narrative with numerous subplots, laced with umpteen heroes (and a few villains . . . ) and culminating in the most extraordinary finale.

. . . For those clinging to the vestiges of imperial superiority in at least one sport, 's presence in the last 16 of the World Cup is strange enough. But it is utterly deserved. For all the skill in evidence, the decisive factor was the Australian spirit. At the risk of making national generalisations -- there may well be inefficient Germans and long-ball Brazilians -- the Socceroos displayed the character that is a hallmark of Australian sides on other sporting fields.


The Age reported this delightful sidelight from the crowd gathered before a giant screen in Melbourne's Federation Square:

The Croatians had the first roar. As they saw their first goal — the game’s first goal — cries rang out from their small encircled enclaves in the great crush of green and gold. A mother and her children, all decked out in red and white checks, chanted in triumph: “Mir Hrvati! Mir Hrvati!” (We Croatians!) Others, who had come armed with more than just their voices, hurled celebratory plastic bottles, rolls of unfurling loo paper and hot pink phosphorescent flares at the big screen. This was their moment. Socceroos fans nearby were less than generous in allowing it to them. “Bullshit! Bullshit! Bullshit!” some of them jeered in unison.

GO SOCCEROOS! GO GHANA!
It's been tough for me to know who to root for from the outset of the World Cup.

I suppose I was unpatriotic to not get behind a lackluster U.S. team that slunk home after scoring only a single goal in three matches. (Embarrassingly for both teams, Italy scored their only other goal.)

That left my two faves -- Australia and Ghana.

Australia because it is my adopted second home and Ghana because of its wide open style, which is a thing of beauty and a joy forever . . .

. . . or until Monday afternoon when it faces Brazil. Alas, I think that it will be the end of a great run.

I'm prepared for lightning to strike again when the Socceroos face off against Italy, but the Italian eleven has improved with each match and will be very tough to defeat.

That always leaves England for me to root for, but for the time being my allegiances are elsewhere in the commonwealth.

So, to summarize your World Cup so far, the US had a bad first match in probably the second toughest group, and so you dump them to go for Ghana. And you're not being unpatriotic, but something far worse in sports, a fair weather fan.

And while the US could have played better and I am wildly dissapointed in Bruce Arena, these things happen in soccer. I guarantee you that if the US played Ghana five times, they would have won or tied four of them. And while you rave about Ghana's "beautiful" and wide-open play, the US controlled that match for 3/4 of the time. They outshot, had more corners, less yellow cards and half the fouls of Ghana. And there are essentially 15 other teams that play just like Ghana too.

So while I know it is the hip thing right now to bash the US National team, give them a break for at least half the second.

No, I'm not a fair weather fan. Like I said, my support for the U.S. was tepid to begin with. Unless I'm missing something very essential, which is possible, just because I'm a Yank doesn't mean that I have to fall at the feet of my national team.

You are right that the U.S. might have beaten or tied Ghana if they played four more matches with them. But they had only one shot, and to my uneducated eyes, Ghana cleaned their clock regardless of what the stats said. Okay, I guess that means the U.S. won the stats match while Ghana won the scoring match.

So you're wildly disappointed in the coach but not the team's play? It's difficult for me to separate one from the other. They both seemed to sleepwalk a lot of the time.

Finally, if the U.S. cannot contend in the "toughest" group, they ought to give up and not even think about fielding a team next time. Or maybe it can enter the World Cup for Good Stats.

Give me a break. In a previous post you weigh who to root for based on which team would go farther. How does that not make you a fair weather fan? Reading your World Cup posts feels like I am reading the thoughts of a Dallas or New York Yankees fan.

And give me one good reason why you shouldn't have the USA be your #1 team?

First of all, I am not taking the World Cup nearly as seriously as you.

Third, would it be impolitic to ask whether you are rooting for anyone or even watching the cup now that the U.S. has been eliminated? By your calculus, that would seem to be unpatriotic.

Fourth, I am not taking the World Cup nearly as seriously . . . oh, I already said that.

A decent group of straw man arguments, if I've ever seen any. You say I'm calling you unpatriotic, even though from the outset I said that patriotism has nothing to do it.

My question was why you could justify rooting for Ghana over the US... you still have yet to answer. Instead you say you're not taking the World Cup that seriously, and that is why you can like more than one team. This, despite the fact I never said you couldn't like more than one team (again, hello straw man). Besides the US, I was rooting for England and the Ivory Coast (the whole civil war thing). But I wouldn't root for them over the US, which is the whole point I was making.