Iraq I: The Sound of Many Axes Grinding 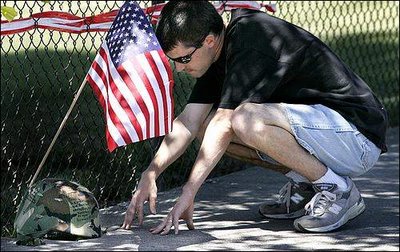 A man pauses at a shrine for Thomas Tucker in Madras, Oregon
The sound you hear is the many axes being ground over the torture and beheadings of Kristian Menchaca and Thomas Tucker by Al Qaeda insurgents in Iraq.

Many bloggers and other commentators were less inclinded to dwell on the horror of the deaths than to twist them to fit their own agendas. Me too.

I entered the fray early on in a Tuesday post that noted that these young troopers were victims of what Defense Secretary Rumsfeld smugly refers to as "coercive interrogation techniques" when Americans are holding the whip. I suggested that given the Bush administration's abominable handling of the war and endorsement of extra-legal methods, the official response to the deaths should be that:

The two were only glorified traffic cops. Besides which, we use torture, too.

Coping this attitude enables conservative war mongers to get out from under a very big moral paradox:

Torture is wrong, but this is wished away because America is right and has the moral authority to do any damned thing it wants.

* * * *
I am a regular reader of Glenn Reynolds' Instapundit blog and he usually keeps a fairly even keel. But he got caught out on the deaths and ended up dinging himself with his own ax.

Glenn Boy had posted a link to a piece that he described as "shocking" about Al Qaeda recruiting terrorists in Iraq. What was shocking to me is how unshocking this was -- and that Glenn Boy obviously was ignoring the biggest story of the day.

Enter Andrew Sullivan at The Daily Dish. Sullivan still more or less supports the war, which I do not, but I admire him hugely for his steadfast and beautifully articulated condemnation of Bush administration-approved torture of enemy combatants. (And for being able to change his mind, which is a trait that he and Yours Truly but few other bloggers posess in the rare air of the blogosphere.)

Sullivan got on Glenn Boy's case for ignoring the Menchacha-Tucker story, while I fired off an email to the him saying the same thing.

Lo and behold, the following snarky post appeared on Instapundit a little later in the afternoon followed by a profoundly stupid update from a guy who obviously had been caught out for being soft on torture when Americans are not on the receiving end:

U.S. SOLDIERS TORTURED BEFORE DEATH: And yet Guantanamo will get more ink. And, again, the argument is that it's a man-bites-dog story when Al Qaeda tortures -- but that's belied by the moral equivalence that we keep seeing in the coverage.

UPDATE: Okay, the above doesn't really capture what I think, and at the moment I'm at a loss to phrase it better. I'm quite upset by the events, obviously, but I feel that too many people in the coverage are trying to make hay out of it, and, after a few minutes, looking at my post it seems like I did the same thing. I don't want to take it down, though, since I don't generally do that. I'll try to come up with something more coherent later, but I do think that claims that Al Qaeda is torturing our soldiers because of some policy-manual for Guantanamo are implausible, to say the least.

Glenn Boy is silent on the subject today. While I hope that his ax wound was only superficial, I trust that he will learn from the experience.

Sullivan himself caught heat from readers who could not believe he would put the Bush interrogation policy and the beheadings on the same moral plane. I'm not sure that Andrew did that, but one reader says:

Until you can show me evidence that a U.S. Government interrogator has taken a dull knife, cut into the throat of another man or woman, and sawn through skin, muscle, tendon, and bone until the head of that persons detaches from their neck, please don't make such an intellectually dishonest comparison between these barbarians and our own government.

Our enemies are fundamentalist nihilists. We may have to fight a harder, dirtier war against such a disgraceful enemy. But we still must do what is necessary to win.

Today has been a very tough day. I feared the worst when I found out about the soldiers taken by terrorists. I've been sick all day thinking about what they must have gone through.

I'm sorry, but reading your description of what the did to Abu Zubayda did not make me sick. I could only hope that our soldiers were treated so humanely. Of course, I know they were treated much worse, and were eventually killed.

I think that reasonable people see the difference between us and the terrorists. Those who don't would never give us any slack anyways.

Your attempt to use this very sad day to prove some esoteric moral perspective makes me even sicker than I already was.

To whom Andrew replied:

I feel sick too. All I can say is I just do not believe opposing the torture of prisoners is an "esoteric" moral position. I think it's the most basic moral position there is. And it requires reiterating precisely when all our emotions are programmed to violate it.

* * * * *
Of all the things that could be gleaned from the torture deaths, it would have never occurred to me to dwell on what Wretchard did at the Belmont Club:

The first instinct of any family is to do anything possible to save their loved ones. For individual families it is often better to cooperate with captors to obtain some chance negotiating a release than to press them unremittingly. For society as a whole the incentives go the other way: yielding to intimidation only leads to worse. Evil men must be pursued so that they may never harm again. Unfortunately individuals must pay the price when evil strikes back.

. . . If the past is any guide, this group's preference would have been to parade them on television and make political demands for an American withdrawal, or else they would have killed at the scene of the first clash. That the terrorists had to forgo their customary media carnival can only mean they found it too dangerous to go further, like a predator who must drop his victim because the beaters were right behind them.

So are we supposed to feel good that these young men were spared a carnival on the way to their deaths? I found Wretchard's comment to be atypically stupid, if not off point altogether.

* * * * *
Never mind the beheadings, there's a silver lining in this blood-soaked cloud for Gay Patriot, who slaps on his rose-colored glasses, snaps to attention and salutes the fact that:

As horrible as these murders are, it is important to note that it is one of the few times Al Qaeda has succeeded in directly attacking coalition soldiers in Iraq. Normally, they do not directly attack our troops, but instead use Improvised Explosive Devices (IEDs) to target them. It is a sign of their weakness that they have largely been targeting civilians, murdering innocent Muslims.

They’re killing their own people to make it appear that we are losing. And the Western media is helping them make their case. In the very AP article on the murder of the U.S. soldiers, the reporter writes that "Violence was unabated Tuesday with at least 18 people killed in attacks nationwide . . ."

Ah yes, implicitly blaming the messenger. Can I have some of what this guy's smoking?


Over at National Review Online, David Frum bemoans all of the people whom he claims are condoning what happened to Tucker and Menchaca because the Bush administration embraces torture as a legitimate tool of war. I certainly did not make that connection and while I didn't stay up all night looking, I couldn't find anyone who did.

Much that happens in Iraq seems senseless, but the kind of terrorism practised by al Qaeda in Iraq is anything but. It is profoundly rational, purposeful, and goal-directed. They do not torture, mutilate, and behead because they are enraged by some piece of propaganda they happened to hear on al-Jazeera the day before. Terrorism is a political method, adopted in pursuit of political ends. Those ends were selected - and the methods chosen - long before anybody had ever heard of Guantanamo as anything other than a sleepy naval station.

Too many people on all sides of the political spectrum talk as if only the United States acts, while everybody else merely reacts.

But in this war on terror, the United States could install every captured insurgent and al Qaeda operative in his own hotel room with Spectravision and halal room service - without in any way altering the strategy or tactics of al Qaeda.

But would they be able to order from room service? What's your point, David?

Meanwhile, a high-level investigation has begun into why Menchaca, Tucker and a third soldier who was killed in the kidnapping had been traveling alone outside a fortified base camp in Yusufiya, which is regarded as one of the most hostile places in all of Iraq.

The circumstances of the initial attack remain mysterious. In a country where military vehicles -- even the most heavily armed and impervious tanks -- rarely leave fortified areas unless they are traveling in pairs, the Army confirmed that the servicemen were alone.

Can we expect a U.S. shootdown of a North Korean missile launch test to divert attention away from the deaths?