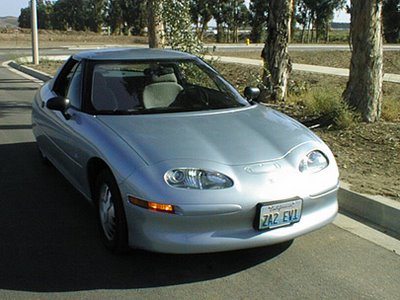 Why did GM pull the plug on the innovative EV1?
We are entering the Age of the Hybrid, cars that run partially or wholly on propulsion sources other than fossil-fuel driven internal compustion engines.

This is why the new movie "Who Killed the Electric Car?," which opens in select U.S. theaters on June 28 and goes into national release on July 21, is bound to be at least a modest hit even though the star has had neither liposuction nor breast enhancements.

The movie focuses on why General Motors, our favorite dysfunctional car company, created a dynamic battery-powered auto that drivers loved, only to kill it. Had the movie come out even a year ago it probably would have died a quiet death. Check it out here.)

Anyhow, with an impeccable sense of lousy timing and an air of mystery, the Smithsonian Institution's National Museum of American History has removed a rare surviving example of the car that GM killed -- a silver-blue 1997 EV1 sedan -- from display just as the movie is about to debut.

Maybe it's all just a coincidence, but it should be noted that GM donated the EV1 to the museum and happens to be one of its biggest contributors. Even the hall in which the EV1 sat is named for The General.

YOU CAN BET YOUR HYBRID ON IT


In another coincidence, my son pulled into the driveway of Kiko's House last weekend in a Honda Civic Hybrid.

Other than being a little cramped for someone who is 6-foot-2, I found the car to be a dream:

Fit and finish great. The sound system first rate. Stylish in design. No discernible loss of performance when the AC was on. Unusual but not unpleasant sounds as the electric motor kicked in or the battery charged up when my son hit the brakes.

We zipped up the interstate to catch a Phillies game. Average gas mileage there and back: 47 miles per gallon.

So what is GM's response to a formidable challenger like this?


A couple of small SUVs retrofitted with hybrid technology and more deep discounts to push its slow-selling dinosaurs out of showrooms. And $1000 “free gas” promotions in certain states to lure drivers into its gas-guzzling big SUVs.

AN IDEA WHOSE TIME HAS COME
My son lives in an urban area and could no justify paying insurance on his old Volvo wagon, which he would drive only occasionally, so he joined Flexcar, a for-profit car sharing company with a presence in Chicago, Los Angeles, Portland, San Diego, Seattle and Washington, D.C.

Flexcar members choose a rate plan and pay an annual fee that covers gasoline, insurance, maintenance and cleaning. In addition to hybrids, their fleet includes light trucks and minivans. Each vehicle has a home location,typically in a highly-populated urban neighborhood. Members reserve a car by web or phone and use a key card to access the vehicle. Vehicles are returned to their home location.

AN IDEA WHOSE TIME HAS COME -- AND IS GOING
While hybrids are not as cheap as ordinary cars to maintain, there has been a federal government tax credit for hybrid buyers since January that seems even sweeter with the price of gasoline hovering around $3 per gallon throughout the U.S.

But the devil is in the details, and as The New York Times explains, a tax credit that ostensibly helps hybrid makers like Honda and Toyota/Lexus is actually benefitting U.S. automakers more. Find out why here.

TOO LATE TO MUSCLE IN
GM's notable tone deafness when it comes to anticipating and riding automotive trends expends beyond hybrids to muscle cars.

The General had nothing to match Ford when it introduced its retro-style Mustang but is now rushing to market a retro Camaro that will be in showrooms next year.

To little too late, says Eric Peters of the American Spectator in a Wall Street Journal piece:

The news has been accompanied by great fanfare and hagiographical commentary in the motor press -- the same way news that would be bringing back the GTO ginned up much tub-thumping and happy scribbling back in 2003.

. . . But the revived GTO died quickly and quietly--despite heroic horsepower numbers and better performance than any classic-era GTO ever delivered. Some of us saw it coming from the get-go.

The new Camaro will probably die on the vine for the same reasons--and a couple of new ones, too. And again, it's not all that hard to understand why. Or to see the iceberg dead ahead.

Unlike the Mustang--which has always managed to appeal to a broad base of buyers ranging from young women to old men and everyone in between--the Camaro is and always has been a strutting muscle machine. A car for drive-throughs, Friday night cruising, and teenage boys.

That works fine when it's 1969--and young, single guys can still afford to buy (and insure) such a car. It doesn't work so well in today's hamstrung, hyper-regulated and cost-inflated world. Part of what killed the latter-day GTO was its $30k price point. The young (under 30) guys who might want such a car couldn't afford it--and the older guys who could had grown up. They wanted something less goofy. So did their wives. The same problem will surely beset the coming Camaro--unless GM, by some miracle of Enron-esque accounting, figures out a way to sell the thing for less than $25,000.

U.S. 3 -- EUROPE 52
Then there are diesel cars, which G.M. flirted with and then dropped despite their economy and durability. Not European carmakers, who offer 52 diesels on the Continent and in England but a mere 3 in the U.S.

Winding Road, a slick online auto magazine, goes nuts over diesels in its new issue. Go here to download your very own free issue.
Posted by Shaun Mullen at 4:41 AM
Email ThisBlogThis!Share to TwitterShare to FacebookShare to Pinterest