Iraq I: Good News Amidst the Chaos 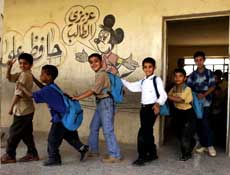 There are positive things happening in Iraq that tend to get lost in the Sturm und Drang of death and destruction.

Lemme tell you, it was not easy finding good news and that's not because it's not out there. It's because most of it is so trivial, so incidental or so fleeting that it just ins't worth mentioning.

Anyhow, after considerable effort this is what I came up with:

SCHOOL DAZE
Enrollment in public schools has risen every year since the 2003 U.S. invasion, reversing more than a decade of declines and offering evidence of increased prosperity for some Iraqis.

Despite the violence that has plagued Iraq since the American occupation began three years ago, its schools have been quietly filling. The number of children enrolled in schools nationwide rose by 7.4 percent from 2002 to 2005, and in middle schools and high schools by 27 percent in that time, according to figures from the Ministry of Education.

The increase, which has greatly outpaced modest population growth during the same period, is a bright spot in an otherwise gloomy landscape of bombs and killings that have shattered community life in many areas in western and central Iraq. And it is seen as an important indicator here in a country that used to pride itself on its education system, then saw enrollment and literacy fall during the later years of Saddam Hussein's rule.

Not surprisingly, Baghdad is the only province in the country where primary school enrollment fell.

HOLY COW
While Sunni and Shiite militias continue to battle each other, Kurds in northern Iraq are creating a constitution that does away with Shariah, or Islamic law.

The move runs counter to the trend in other Muslim countries such as Afghanistan and Iran, where leaving Islam is a capital offense and Christian converts are often killed.

<>Meanwhile, an increasing number of Kurds are converting to Christianity.

WOOF, WOOF
Feral dogs are a menace throughout Iraq, but the Army Veterinary Corps has made inroads in dealing with the problem.

A group of Army engineers learned that five villagers, including a child, had been bitten by a stray dog. The dog was killed by the villagers, and buried. Our soldiers, concerned that it could have rabies, dug up the body and sent tissue samples to the Veterinary Corps in Landstuhl, Germany. The dog did have rabies, and the five villagers who were bitten received appropriate medical care, saving their lives, and earning the gratitude of the entire village.

Omar at Iraq the Model is warming to the controversial amnesty provision in Prime Minister Maliki's reconciliation plan.

Zeyad from Healing Iraq blog recently met with a bunch of Jordanian bloggers and posted this report.

Meanwhile, Fatima at Thoughts From Baghdad is in the States for a while and tells what it's like to get out of Dodge.
Posted by Shaun Mullen at 3:35 AM
Email ThisBlogThis!Share to TwitterShare to FacebookShare to Pinterest

Always important to look for positive points, especially when things are looking so down. Thanks for the round up.

Btw: I know a few female cousins in law, esp. in Mosul, who's parents pulled them out of school for the past two years, because of the security issues.

It is so great to hear from you and to know that you made it out of Dodge okay.

I feel an obligation to leaven my blog loaf with good stuff when everything seems bad, and to include views with which I do not agree, which I am doing at some length in my follow-up to the big U.S. Supreme Court ruling.

But, as I noted, it is very sad when there is so little good to report from Iraq. In fact, its heartbreaking.

May you have the wind at your back wherever you go.