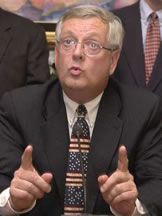 Rep. Curt Weldon has proven himself to be seriously wacko, but his latest stunt is a whopper.

Weldon, a Republican from Southeastern Pennsylvania, is one of the small number of people who still believe that Saddam Hussein had WMDs. Never mind that the U.S. military cashed in its chips on this one many moons ago.

Weldon planned to lead a secret mission to Iraq to literally dig up what he claims are WMDs, but a fellow WMD freak put the kibosh on the plan.

That would be Dave Gaubatz, a former Air Force special investigator who served as a civilian in Iraq and acquired what he considered reliable information on the existence of WMD caches in four locations in Basra and Nasiriyah.

Gaubatz couldn't get U.S. military officials to look into the info and contacted Weldon and Rep. Peter Hoekstra, the Michigan Republican who heads the House Intelligence Committee, in the hopes that they could put pressure on the military.

Instead, Gaubatz said, Weldon hatched the wild scheme to go to Iraq with Hoekstra under the guise of visiting U.S. troops over the Memorial Day weekend. Once there, they would detour to remote and extremely dangerous Nasiriyah where they would dig up those elusive WMDs equipment borrowed from the Army.

Gaubatz blew the whistle after a meeting with Weldon, a 10-term incumbent who is facing a tough re-election fight in a district where voters are sick and tired of his hijinks.

It was treated as an election issue that would get votes. I've never been involved in politics, so it was a very big eye-opener to me.

A spokesman for Hoekstra denied that he was in on the scheme. Weldon has sidestepped the issue and has merely retirerated that the jury is still out on WMDs and he knows of four sites in Basra and Nasiriyah that have not been searched. This is news even to the White House, which has acknowledged that President Bush's claims three years ago that WMDs were found in Iraq was based on false U.S. intelligence.

Meanwhile, Weldon has managed to get himself in trouble with veterans as well as his constituents.

You can honor the service and sacrifice of these brave men and women by acknowledging the reality on the ground in Iraq and moving forward with the facts, not spin.

NOW HEAR THIS
Rep. Jane Harrman, a California Democrat, scoffs at calls for WMD hearings by Weldon and other Republicans:

Those pushing this story are trying to manipulate the facts to get an outcome they want, and we know from recent experience what happens when the intelligence gathering process is politicized.

If the Republicans want hearings, then let’s have hearings. But they should cover the use – and misuse – of all pre-war intelligence, not just this flimsy and cherry-picked report that is much ado about nothing.

What about this quote from Reuters from Lt Gen Michael Maples, head of the Defense Intelligence Agency and, I would assume, an expert on WMD.

From Reuters: "If the chemical agent, sarin, was removed from the munitions and repackaged, it could be lethal. Its release in a U.S. city, in certain circumstances, would be devastating, Maples said."

Because of its ease of repackaging and distribution, sarin is indeed a huge worry.