The Selling of the Wild West 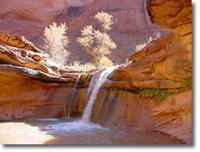 I've spent enough time trekking around the American West -- including some of the more remote federal lands in Colorado, Utah and New Mexico -- to know that the people in those states who bristle at Washington controlling vast swaths of their most scenic and developable land have a point. It just happens to be at odds with the conservation and historic preservation movements, as well as a lot of fair weather vacationers.

Nowhere has the pushback been greater than in and nowhere in than in , which is one of the five fastest growing in the but has next to no room to expand because 87 percent of its land is owned by the feds.

Although is off the beaten track, it's not hard to understand why so many people, primarily retirees, are moving there.

It has a mild climate, relatively low taxes and is close to several national parks, including the . This is one of the last explored areas in the continental and for my money packs every bit as much visual punch as the Grand Canyon of Arizona, as well as the fact you can cool your tired tootsies in Calf Creek or one of the other waterways on a boiling hot summer day in the otherwise arid area.

Like I said, I sympathize with the locals -- but only up to a point.

That point is well this side of a bi-partisan legislation hatched by 's congressional delegation to grab up to 40 square miles of federal land in , half of it in the shadow of , and sell it to finance a water pipeline and other projects.

The worst is yet to come.

The Bush administration is advocating the sale of hundreds of thousands of acres of federal land in the region and the current budget requires the U.S. Forest Service to sell 300,000 acres and the Bureau of Land Management to raise $350 million by auctioning some of its vast holdings.

Janine Blaeloch, director of the Western Lands Project, tells it like it is:

People hoorah these projects on the local level, saying, 'We are going to do this for our people.' But small groups benefit, and those are developers, paving companies and golf course developers. Where federal land has been taken over for development, it ends up being used for second homes and high-end development.

Posted by Shaun Mullen at 4:01 AM
Email ThisBlogThis!Share to TwitterShare to FacebookShare to Pinterest