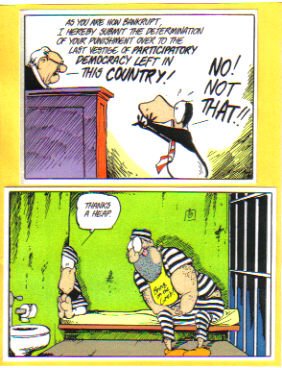 
As we slouch into the Memorial Day weekend here in the U.S., what better way to celebrate America than to pause on our way to the shore to dwell briefly on what even a dumb penguin like Opus knows has become the greatest weapon in the national arsenal -- hypocrisy.
I haven't the time nor the brain cells to do an entire Hypocrisy Alphabet, so herewith an abbreviated version:

A special ACLU committee this week recommended new standards for board members that would discourage them from publicly speaking out against other members or the policies of an organization that ostensibly advocates free speech.

Seven years after giving $1.1 million to his alma matter, the University of Missouri, to endow a chair in economics, the freshly convicted Enron founder wants a refund, something that the millions of little old ladies that he and fellow frog walker Ken Skilling ripped off will never get.

. . . I could go on and on, but the penguin is rattling his empty food dish at me.

* * * * *
Got any suggestions for filling out the other 17 letters of the alphabet? Send 'em along with a few well chosen words to kikokimba@gmail.com
Posted by Shaun Mullen at 7:54 AM
Email ThisBlogThis!Share to TwitterShare to FacebookShare to Pinterest

Can we get an "m" for mission (not quite) accomplished? Or perhaps an "f" for foreign policy? Because acting like the biggest bully on the international playground really only works when you have the strategy to back it up. And we may have the biggest guns, but if nobody in Washington knows where and when to point them, what can we ever accomplish in Iraq? If there's no defined goal other than "stopping terrorists" how will we ever be safe? Bush & co. can rattle on about protecting the homeland as much as they want, but all they've managed to do is make people all over the world hate America while dragging us into a war that they don't know how to win.

This is a brilliant list, by the way. I certainly agree with everything you've said on here.