The Notes That Could Bring Down a Presidency 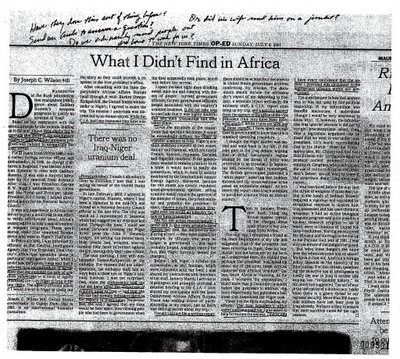 These are the notes that Vice President Cheney wrote in the margins of the now legendary July 2003 New York Times op-ed column by former ambassador Joseph Wilson. In their own round-about way, the column and notes led to the Wilson-Plame grand jury, which has already nailed I. Lewis "Scooter" Libby, the veep's chief of staff, and now threatens to take down Karl Rove.

Cheney's notes were part of a filing on Friday night by Special Prosecutor Patrick Fitzgerald in the perjury and obstruction case against Libby. Fitzgerald said in the filing that they show that Cheney and Libby were "acutely focused" on the Wilson column and on rebutting his criticisms regarding the White House cooking pre-Iraq war intelligence.

The jottings challenge the legitimacy of Wilson's CIA-sponsored trip to Africa to investigate the bogus Niger uranium claim. Cheney writes:

Have they done this sort of thing before? Send an Amb. [sic] to answer a question? Do we ordinarily send people out pro bono to work for us? Or did his wife send him on a junket?

Fitzgerald was a busy boy on Friday.

In the surest sign yet that the president's consigliere may be indicted by the Wilson-Plame grand jury, the ever deliberate special prosecutor is said to have met with Rove's lawyers for five hours. You can be sure that they didn't talk about the weather.