The Movie That Dubya Doesn't Want You To See 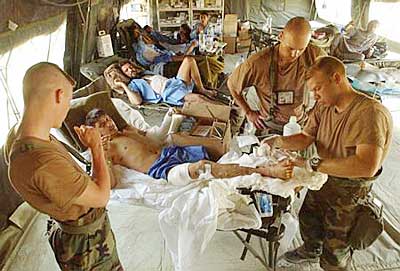 "Baghdad ER" is a film about the Iraq war unlike any other. It opens with a medic carrying a human arm, amputated above the elbow after a trooper is maimed in an explosion from an IED (improvised explosive device), and for the next 60 minutes shows in shockingly graphic detail what war is really all about.

The documentary is the work of Emmy Award-winning filmmakers Jon Alpert and Matthew O'Neill, who spent two months at the main front line medical facility in Iraq -- the 86th Combat Support Hospital in Baghdad's Green Zone -- with the full cooperation of the Army.

That has now changed.

The Pentagon is concerned that "Baghdad ER" will send the wrong message, let alone become cannon fodder for antiwar activists. It also has taken the extraordinary step of having the Army surgeon general issue a warning that viewing the documentary could trigger symptoms of post-traumatic stress disorder for Iraq war vets.

Shows the ravages and anguish of war.

Those who view this documentary may experience many emotions. If they have been stationed in Iraq, they may re-experience some symptoms of post-traumatic stress, such as flashbacks or nightmares.

What about Vietnam veterans? Or the equally brave souls who fought in Korea or WW2?

A WAR UNLIKE ANY OTHER
Rupert Cornwell, a commentator for The Independent, is doing some of the best stuff on Iraq, but unless you live in the U.K. and can buy the London daily or care to ante up so you can get through its online subscription firewall, you're not going to be able to read him.

As luck would have it, the Dear Friend & Conscience just got back from England and, as she always does, brought with her a big pile of newspapers, including an Independent with a Cornwell story on how the brass now fears that "Baghdad ER" will further undermine public support for the war.

Barring the odd technically blurred face of an appallingly injured soldier, "Baghdad ER" flinches from nothing, be it pools of blood and guts on the floor, shattered limbs, and men in the last instants of life.

You are spared nothing. In one harrowing scene a chaplain comforts a dying Marine. "We don't want you to go. We want you to fight," he says. "But if you can't, it's okay to go. But we'll be right with you. If you get better, or if you go."

Above all, "Baghdad ER" breaks a taboo. Insofar as possible, the Bush administration has kept this war as quiet as possible and as sanitised as possible. The victims that have been shown have mostly been Iraqis, not Americans.

Sometimes the President has talked of "sacrifice." But for ordinary Americans who do not have friends or family who have done a tour in Iraq, this has been a war virtually without sacrifice (unless of course you attribute the rise of petrol prices to the conflict).

Mr. Bush stresses constantly that America is at war, and may be so for decades to come. But for all the bumper stickers declaring "Support Our Troops," this has been a war unlike any other. Wars usually demand belt tightening, tax increases or some other form of deprivation, however modest for the citizenry. In the "war on terror," like other wars, spending has soared. But the last few years have been a festival of tax cuts -- at least for the better off -- despite record deficits. "Spend, spend, spend" might have been the official advice on how the home front should comport itself in this proclaimed time of national testing.

But "Baghdad ER" disposes with the illusion of normality as brutally as an IED.

* * * * *
You can read more about "Baghdad ER" and see a video clip here.
Posted by Shaun Mullen at 5:40 AM
Email ThisBlogThis!Share to TwitterShare to FacebookShare to Pinterest

Even though I am a supporter of the U.S. military presence in Iraq, I think its useful that the painful images get some play in the states. It does help to put into perspective the costs of the war, and reminds us of the heroism of those who serve.

The images remind me of the movie I was forced to watch in my driver's ed class in high school. Shocked the hell out of me, and for a few months, I slowed down and was a better driver for it. Then I had a friend who died in a car accident, and I REALLY understood the cost of poor driving.

It probably takes losing a loved one to truly understand the costs of war.