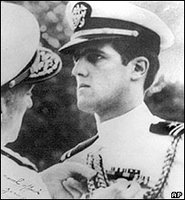 "I'm moving on," John Kerry tells people in explaining that he does not want to dwell on his 2004 presidential campaign.

Which in my view was the biggest debacle since Michael Dukakis stuck his head out of that Army tank and lobbed whiffle balls at Bush the Elder in 1988. (Al Gore's 2000 disaster is a close second, and it never ceases to amaze me that six years later people still ignore the fact that he created the conditions for the Florida smackdown by running such an inept campaign.)

Anyhow . . . in one area Kerry is looking back and rightfully so:

He is belatedly but aggressively going after the Swift Boat Veterans for Truth scumbags who claimed that he fabricated stories that he went into Cambodia while serving in Vietnam and was dishonest and unpatriotic.

The Swift Boat Veterans are still slinging mud and raising money for various right-wing causes and, according to The New York Times, gave $100,000 to a group that has sued Kerry for allegedly interfering with the release of a film that was critical of him. Kerry denies the charge.

Meanwhile, Kerry's supporters are quietly gathering evidence about his war record to counter the Swift Board Vets. They say that has less to do with Kerry possibly running again (please say it ain't so, John; ditto for Al) than an effort to correct the public record.

Kerry has authorized the Navy to release his service records, something that he stupidly refused to do during his campaign against a chicken hawk president who goofed off in an Air National Guard unit -- when he wasn't dusting his nose -- and never went to war.

Kerry now says that his campaign should have put more money into counteracting the Swift Boat Vets' claims:

I take responsibility for it; it was my mistake. They spent something like $30 million, and we didn't. That's just a terrible imbalance when somebody's lying about you.

Better late than never.
Posted by Shaun Mullen at 12:12 AM
Email ThisBlogThis!Share to TwitterShare to FacebookShare to Pinterest