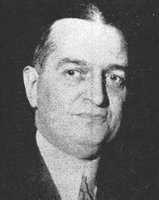 The Judge Crater alluded to in the first paragraph of the Hoffa post was Judge Joseph Force Crater, who along with the labor leader are the hand's down winners of who the greatest disappeared Americans are.

Crater, a municipal judge in New York City, was the source of a national manhunt and butt of countless jokes and New Yorker cartoons in the years after he vanished. When our loopy Irish setter would disappear, which he did often when I was a child, my mother would inevitably say:

Oh, Treeve is off looking for Judge Crater.

In the summer of 1930. Crater and his wife were vacationing at their summer cabin in Maine. She unexpectedly received a phone call from him saying that he had had to return to New York “to straighten those fellows out.” He instead went off to Atlantic City with a showgirl and then vanished after leaving a series of tantalizing clues.

Crater was declared legally dead in 1939 and his case was officially closed in 1979.

Then last August, police revealed that they had received a letter written 50 years earlier by a woman who claimed Hizzoner was buried under the boardwalk at that skeletal remains indeed had been discovered at that location in the 1950s, but had been buried in a Potter's Field along with thousands of other unmarked and unidentified remains.

Ahem.
Posted by Shaun Mullen at 3:00 AM
Email ThisBlogThis!Share to TwitterShare to FacebookShare to Pinterest