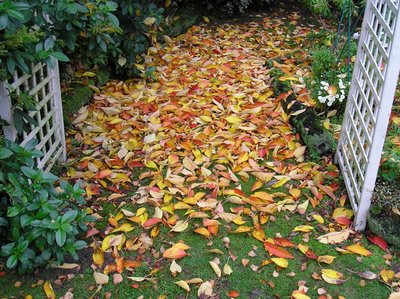 You've read before in these Chronicles that the Wairarapa valley is prospering, and despite recent signs that the New Zealand economy is slowing (though not as fast as has been predicted) the boom here unquestionably continues. This is especially true if you're running a railway company, because now that gasoline has reached around $NZ1.75 a litre [or $US4.12 a gallon], there is a visible reduction in the traffic and a widely reported increase in the number of commuters who have to stand all the way to Wellington in the train, on their way to work. It seems that such increases in demand, here and elsewhere, have caught public transport operators short, because it seems you can't buy fresh rolling stock and buses by simply dialling up eBay. One prays they will get their skates on, however, because it's difficult to see the price of gasoline coming down much, or for very long.

It seems inevitable to me that the point will come -- and may well have already arrived -- when the whole question of investment in infrastructure will have to change focus, and the institutions at our disposal are not well equipped for sudden shifts in direction. The new Wellington cross-town artery taking traffic from the north to the airport took 30 years to mature from an idea to the actual moving of soil, and such snail's-pace change has happened -- or rather, not happened -- almost everywhere in this fair land. New Zealand readers know exactly what I mean, and importing Chinese construction teams won't fix the problem.

Yet not everyone, it seems, is prospering. Or may be making bad choices. Seen recently on the back of a horse trailer, such a common sight in these parts, was the pathetic sign, "Poverty is owning a horse!" They won't think so when the oil runs out, I'll wager.

It's been a while since I wrote, having resolved right from the start of Country Life -- three and a half years ago -- that I won't write unless there's something to write about. You, of course, are the only judges of the worth of my resolve but in the absence of any complaints (well, I did have one once, actually) I'll spend some time in this edition on coincidences.

In recent years in our family coincidence has been a noticeable part of our lives. Lots of things have happened -- some of which I've written about -- which have very tiny mathematical probabilities. We have entirely failed to take advantage of this phenomenon by extending its reach to the winning of Lotto, but then I haven't heard that many of you have achieved that goal either. Which is no comfort at all.

Anyway, recently in the hour before the evening news, TVNZ were running back numbers of the British edition of "Antiques Road Show." Quite the best thing on TV, methinks, and one evening an item appeared about the documentary records kept by Britain's last hangman, a macabre but historically important and interesting collection. (Among those he hanged was William Joyce, whom you all remember as the British WWII traitor Lord Haw Haw.)

This set me to thinking about old and possibly interesting documents lying around here, and I remembered that I have in the bottom of a cupboard a WWII Lancaster bomber navigator's tuition manual. It was given to me by an ex Lancaster navigator called Jack Banks, with whom I worked at Ford Motor Company in the late 50s.

My thoughts turned to him, wondering what had happened to him after all these years. He was a nice fellow, and not obviously scarred by his very frightening wartime employment. The following morning, the obituary column in the Dominion Post recorded the death of Jack Banks.

And then there's Rudolf Vrba. He and and three or four others, no more, successfully escaped from Auschwitz and brought the news to the Allies about what was happening there. He appeared in the 1970s TV documentary "World At War", describing in excellent English -- he was Czech -- his experiences, and he also was seen in Claude Lanzmann's famous 8-hour film about the Holocaust, "Shoah." His story has been widely told, by historian Martin Gilbert among others.

Now, a few weeks ago the papers reported Vrba's death at the age of 81. A day or two after reading the report, I had a phone call from an acquaintance who offered to lend me a book called "My Two Lives," by Lotte Weiss. Did I know anything about this lady and her book? He thought it might interest me. Did I know about Lotte Weiss? Well, yes you could say that. She is a member of a Sydney family that has been the dearest friends of my family for three generations, with a fourth generation recently started! But no, as it happens, I hadn't read her book.

And so the deal was done.

Imagine then, if you will, my reaction when I read on page 79 of Lotte's memoir that after the war, back in (what was then) Czechoslovakia she, also a survivor of those horrors, had met Rudolf Vrba!

Straight down to the Lotto shop! Arghhhhh.....!

We are now heading into our third winter in the country, and it seems to be running late. Memory is an imperfect thing, especially when it's my memory, but I would have thought all the leaves would be down from the trees by now. But no, only some of them are and the result for our garden -- not to mention our roof gutters -- is a big mess. Some of the mess, though, is quite beautiful as the picture of fallen cherry leaves demonstrates.

Still, it's unseasonably warm which is great because I don't have to hump so much firewood. If it's global warming, just don't ask me to take the blame for it!

POSTSCRIPT:
After reading about the Jack Banks incident in this Country Living, he asked that I please don't think about him. It's hard to know what to say.

Posted by Shaun Mullen at 2:43 AM
Email ThisBlogThis!Share to TwitterShare to FacebookShare to Pinterest