Auto Motives: It's Been an Alfa Long Time 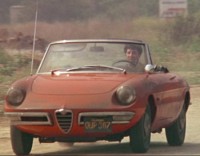 Who can forget Dustin Hoffman's zippy little Alfa Romeo convertible in "The Graduate"? Plenty of Americans, that's who.

Despite that product placement to dream for, Alfa has repeatedly foundered in the U.S. market despite a terrific product line and a racing heritage as good as Ferrari's.

The Truth About Cars reports that

Emboldened by Maserati’s North American comeback [and] reinvigorated by GM’s $2 billion payoff, corporate parent Fiat believes that the Alfa Romeo brand is finally ready to launch its own U.S. re-invasion.

But The Truth doesn't give Alfa much of a chance of succeeding where it has failed repeatedly:

Alfa may have a peerless racing pedigree, but Americans are notoriously uninterested in such things. . . .

As for the reliability side of the equation, Alfa’s build quality, fit, and finish may have improved since their departure, but their cars will have to overcome a great deal of residual distrust. Many Americans have vivid memories of Alfas that fell apart mid-route and/or rusted into thin air. What’s more, Alfa will be facing some of the world’s best-built products (thank you Toyota) in a litigious country (God Bless America) that expects a long, comprehensive warranty (kudos Hyundai) and distinctly non-Italian levels of customer service (all hail Lexus).

In short, Alfa will have zero wiggle room for excessive panel gaps, condescending or indifferent dealers and the odd failure to start-- especially in the all important $20K-$40K segment.

THE WORLD'S MOST ANNOYING AUTOMOBILE
Over engineering reaches new heights with the Mercedes S550. The Truth About Cars explains why here.
Posted by Shaun Mullen at 5:02 AM
Email ThisBlogThis!Share to TwitterShare to FacebookShare to Pinterest