Science Saturday I: A Titanic View 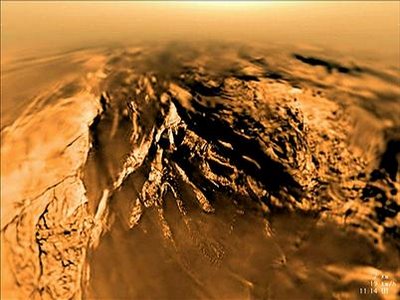 Planetary scientists long assumed that Titan, a moon of Saturn and the only moon in the solar system to have an atmosphere, was covered with hydrocarbon gases. But images such as this one from NASA's Cassini spacecraft show that Titan's equatorial region is a vast sea of sand dunes, some over 300 feet high.

This raises a bunch of intriguing questions, among them how a moon so far from the Sun could have enough sunlight to power the winds to create dunes.

The answer would appear to be gravitational tides produced by Titan's elliptical orbit around Saturn, which may be enough to power winds that blow the sand around in the slight gravity and thick air on the moon's surface.

For more on the photos, check out NASA's Cassini website here.
Posted by Shaun Mullen at 4:13 AM
Email ThisBlogThis!Share to TwitterShare to FacebookShare to Pinterest