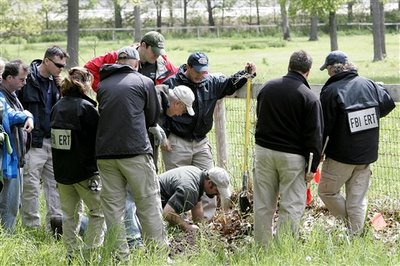 Unless you've been hiding out in a cave with Judge Crater, then you probably know that Teamsters Union President Jimmy Hoffa disappeared from the parking lot of a suburban Detroit restaurant in 1975 never to be seen again. And that reports of his whereabouts arrive each spring with the regularity of the sparrows returning to Capistrano.

This year's tip comes from an FBI informant (as the tips usually do) who wants to knock a few years off his sentence (in this case 10 years for marijuana smuggling), involves a field somewhere (as it usually does) and is considered "credible" by the FBI (which always says that).

In this instance, informant Donovan Wells, who is moldering away in a Kentucky prison at the ripe old age of 75, says he saw Hoffa rolled up in a rug and buried with a stolen backhoe behind a barn at a farm about 30 miles from Detroit where he lived at the time.

This has been a boon for hardware stores (shovel sales) and restaurants (notably the breakfast crowd) in the nearby hamlet of Milford, which has rolled out the red carpet for the attendant media frenzy, which will run its course any day now since the latest tip appears to be yet another dry well.

For those of you who have been in that cave, the diminutive Hoffa was a powerful labor leader with ties to the Mafia. The high school dropout took over the Teamsters Union in 1957 after his predecessor, Dave Beck, was imprisoned on bribery charges and led the union to new heights of corruption.

Hoffa himself was supposed to go up the river on bribery charges in 1971, but his sentence was commuted by a president who would himself become well versed on criminal activity -- Richard Milhous Nixon -- after Hoffa promised to stay away from the union for 10 years. He violated his promise and the Justice Department was in the process of uncommuting his sentence, or whatever it's called, when he disappeared.

HOW CAN I KILL THEE? LET US COUNT THE WAYS
Among the myriad tips about where Hoffa is buried, my favorites are beneath the end zones of Giants Stadium in the New Jersey Meadowlands. No, they didn't bury part of him in one end zone and part of him in the other. The tips simply vary from end zone to end zone.

Among other sites are:

In the backyard of his Bloomfield, Michigan, home.

In an abandoned coal mine shaft near Pittston, Pennsylvania.

In the Fresh Kills landfill in Staten Island, New York.

In an unmarked grave on in

Former Mafioso Bill Bonanno claimed in his aptly mistitled book, "Bound by Honor," that Hoffa was shot and placed in the trunk of a car that was then run through a car compactor, while mob hitman Richard Kuklinski claimed that Hoffa became a bumper, one would presume on a car driven by a Teamster.

ENTER BIG FRANK
If I seem a bit jaundiced about the perennial Hoffa sightings, it is because I knew Frank "Big Frank" Sheeran, a physically imposing World War II hero turned Delaware Teamster official with close ties to Hoffa and the Mafia.

Sheeran and I were not poise-unel friends, as they say in Philadelphia, but we became acquainted through my newspaper work. As I noted in a previous Kiko's House post about our fascination with the Mafia, Sheeran was one of those tough guys who loved seeing his name in print, even if it was a story about him going up the river, which he also did from time to time.

Big Frank called me "Irish." I called him "Mr. Sheeran." He once suggested that I write his biography. I was sort of flattered until I found out that he said that to practically every journalist he met.

Anyhow, Sheeran was the headliner of the 2003 edition of the annual Hoffa sighting.

Big Frank claimed that he had been on such poise-unel terms with the labor leader that he had poise-unelly lured him to a supposed meeting with two Mafia worthies with whom he was feuding, Anthony "Tony Jack" Giacalone from and Anthony "Tony Pro" Provenzano from .

Sheeran claimed that he posie-unelly dispatched Hoffa with two shots from a revolver and his body was buried in the backyard of a house he frequented in Munger Township, Michigan.

Local hardware stores sold out of shovels. There were long lines at local restaurants for breakfast. But of course nothing was found.

EXIT BIG FRANK
Big Frank's tip was the result of a guilty conscience over all of the houses he had "painted" for the Mafia. This is a euphemism for the splattered blood on walls after mob hits.

Sheeran turned to Charlie Brandt, a former Delaware prosecutor, with his tip and ended up having several long conversations with him that were deathbed confessions of a sort since he was terminally ill.

No fool he, Brandt taped the conversations and turned them into "I Heard You Paint Houses," a bestselling book that Big Frank did not live to read.

I always felt a little put out that Sheeran hadn't called me, but I would never have told him so.

If you know where Hoffa is buried, hold off until next spring, okay? Better still, let's hope that the mystery will never be solved. It'll be murder for the shovel industry.
Posted by Shaun Mullen at 3:02 AM
Email ThisBlogThis!Share to TwitterShare to FacebookShare to Pinterest