Amerika IV: Flaming Out on the Olympics 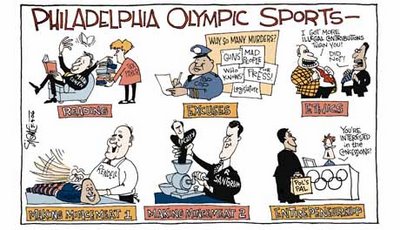 Signe's take on a Philadelphia Olypmpics (c) 2006 Phila. Daily News
As predictably as leap years came and went during my long tenure as an ink-stained wretch in Philadelphia, so did the city's quadrennial bids to host a Summer Olympics.

With several world-class sports arenas, premier cycling and crewing courses, a perfect site for an Olympic village and a terrific transportation infrastructure, Philadelphia is a natural to host the, um . . . well, we're up to the 2016 Olympic Games. But as with previous efforts to sell the City of Brotherly Love, this one also is bound to fall far short of the finish line.

This time, however, the reason is different. We'll let my old pal Will Bunch at Attytood take over:

[T]here is in reality an 800-pound gorilla in the room. Because it is the rest of the world that will decide whether Philly gets the 2016 Olympics.

And the rest of the world hates America today, and probably won't like us much better when the votes are cast in 2009.

Our Olympic hopes are dead on arrival -- and for once it's not even Philadelphia's fault. It's those clowns 130 miles to the south of us. You probably already know that most of the world doesn't like us and why.

Will then tips his hat to Andrew Kohut and Bruce Stokes, authors of "America Against the World: How We Are Different and Why We Are Disliked":

Anti-Americanism runs deeper and is qualitatively different than in the past, when it was largely attributable to opposition to unpopular U.S. policies, such as the Vietnam War. Several factors led to this conclusion.

First, America’s image had declined around the globe, not merely in Europe and among Muslim publics, where opposition to the invasion of Iraq and criticism of the Bush administration were the strongest.

Second, attitudes toward the American people, in addition to the U.S. government, were adversely affected.

Third, the United States was being criticized for its ideals as well as its policies. Fourth, citizens around the world feared America’s unrivaled power and opposed not only what Washington did, but also what it was capable of doing.

And, possibly most troubling, this newfound anti-Americanism was proving itself to be quite robust and long-lived.

It's kind of weird being an American and feeling so helpless. And it doesn't matter that there is a whole lot more right with America than is wrong.

It's going to be a looong time before the U.S. gets another Olympics.

Posted by Shaun Mullen at 3:29 AM
Email ThisBlogThis!Share to TwitterShare to FacebookShare to Pinterest