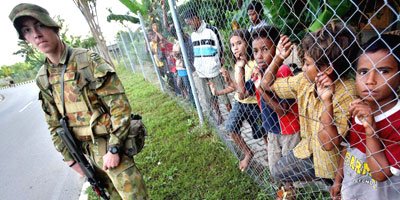 Australia finds itself in the unusual position of currently having more of its troops in East Timor than Iraq or Afghanistan.

Some 1,400 diggers (as well as troops from Malaysia and New Zealand) have joined 150 Aussie soldiers already in East Timor, which has been wracked by days of rioting in the capital city of Dili. Meanwhile, a few hundred miles to the east in the Solomon Islands, 400 Aussie troops were deployed after disputed prime ministerial elections last month resulted in riots.

Writes David Flicking of The Guardian:

It's understandable at a time like this that fears in Canberra turn towards the emergence of an "arc of instability" off Australia's northern coasts.

Even Fiji, the tourist capital of the region, has been looking sickly. There has been no repeat of the coups that result whenever the Indo-Fijian minority gets a taste of power, and fears of unrest were averted this month when generak elections returned a Melanesian-dominated government . . .

The nightmare scenario is that one of these countries could become a failed state and a breeding ground for either terrorism, or transnational crime, or both.

For the latest from East Timor, go here. For a report on the whole mess by the International Institute for Sustainable Development entitled "Aiding or Abetting: Dilemmas of Foreign Aid and Political Instability in the Melanesian Pacific," go here (pdf format).

WHEN STUPID QUESTIONS GET HONEST ANSWERS
An Aussie military commander in Dili wanted to make sure that truth did not become a casualty of war, but embarrassed a TV network in the process.

He was pressed by "Today" news hen Jessica Rowe about whether Dili really was as safe as the Australian military claimed given the presence of the soldiers.

Jessica I feel quite safe, yes, but not because I've got these armed soldiers behind me that were put there by your stage manager here to make it look good.

I don't need these guys here.

It is not safe on the streets as it is back home in Sydney or Brisbane – no it's not, if it was we wouldn't be here. But things are getting better every day.

(Hat tip to The Mudville Gazette.)

Indonesia has long been a "breeding ground for terrorism" — remember Bali? The Australians are understandably edgy having the archipelago an hour's flying away from its northern coast, and it's only about 7 hours from New Zealand, unless you change airlines at Sydney.

While I sometimes wonder why we bother with hopeless states like Fiji and the Solomons, the fact is that the Chinese and Japanese are puring money into them (as recently as yesterday), and it's hard to see why unless it's a projection of their borders closer to Australasia and the US, for what purpose I can't imagine.

But it sticks in my craw that Australia and New Zealand continue to pour money down the throats of these people for no discernible benefit to anyone.

While conceding that I view the situation from afar, it seems obvious that there is indeed an Arc of Instability, that stable central governments have never flourished in this arc and probably never will, and that as a result there is an ongoing threat to Australia.

I would imagine that some Aussies also wonder why their government "bothers" with "hopeless states," but as long as there is turmoil there is a threat and it would seem that Canberra is plotting a practical, if not altruistic, course.

At least the government is not declaring that because Fiji, for example, is a treat to regional security (as well as its own) it will invade, topple the regime and instill democracy at point of gun.

We all know how well that formula works, eh?