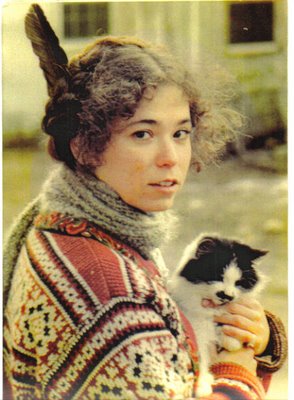 I took this photo of Rochelle in 1978 not long after The Roaring Fork Rope Bridge Adventure, which you can read here. She is holding Terrapin, who was born at the Ernest Hemingway House in Key West, Fla., and lived a storied existence on a farm in Chester County, Pennslyvania.

Papa Hemingway had stipulated in his will that his cats and their progeny were to be cared for in perpetuity. Terrapin was polydactyl because of generations of inbreeding, which means he had more than the normal number of toes, in his case seven each on his front paws and six each on his rear paws.

Terrapin disappeared in the spring of 1979, and while I could never prove it, I'm pretty sure he hopped into a United Parcel truck making a delivery and went off to see the world.

* * * * *
Posted by Shaun Mullen at 1:57 AM
Email ThisBlogThis!Share to TwitterShare to FacebookShare to Pinterest