It's an Epidemic: Conservative Fatigue Syndrome 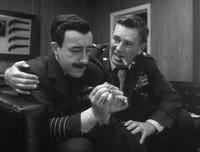 An inevitable consequence of the mess that King George and his court have made of things is that conservatives would sooner or later tire of the cacaphony of bad news swirling around the castle at 1600 Pennsylvania Avenue and jump the moat. And that even the hardest of the hardcore would begin displaying symptoms of what an erudite blogger by the name of Jon Swift has labeled

Anyhow, Jon has put up a trenchantly funny post on his blog that is the first in-depth diagnosis of CFS's horrors that I've seen. It includes a photo of one of my all-time favorite movie characters -- Brigadier General Jack D. Ripper (at right in photo), an archtypically loony conservative played by Sterling Hayden in "Doctor Strangelove."

I heartily recommend it. Jon's post, that is, although the movie is terrific, too.
Posted by Shaun Mullen at 5:06 AM
Email ThisBlogThis!Share to TwitterShare to FacebookShare to Pinterest