The Photo That Launched a Hit Album 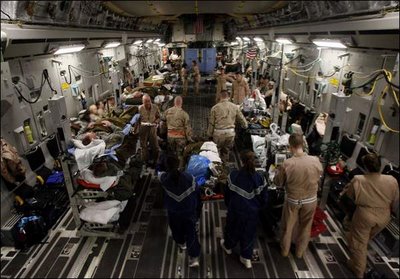 Neil Young says that he was staying in a hotel with his wife while out on tour back in March when he went downstairs to a coffee machine and saw the cover of USA Today with this photograph.

The cover showed a large military craft converted into a flying hospital. The caption said something about how we are making great strides in medicine as a result of the Iraq conflict. That just caught me off guard, and I went upstairs and wrote "Families" for one of those soldiers who didn't get to come home. Then I cried in my wife's arms. That was the turning point for me.

One thing led to another. Young went into the studio when he got home and recorded "Living With War," his new hit album, which includes "Impeach the President" and "Shock and Awe," as well as several other antiwar songs.

The photo of the interior of the Air Force C-17 "flying hospital" was taken by David Gilkey of the Detroit Free Press and was picked up by USA Today for an article on one of the few positive aspects of the fool's mission in Iraq -- medical advances that enable doctors and nurses to save the lives of seriously wounded troopers who in previous wars wouldn't have had a chance of surviving.

There were 32 patients on this particular flight from Balad, Iraq to a military hospital at Landstuhl, Germany, many of them in litters stacked three high on aluminum racks.

Among them were burn patients; an amputee; soldiers with broken bones, a shoulder sprain and back injuries; one with a blood disorder; two psychiatric cases; and a servicemember stricken with lung cancer. Two in critical condition were hooked to ventilators.

Take a good look at the photo. It has an awful beauty. And is a reminder of all that is awful about the war.
Posted by Shaun Mullen at 9:50 AM
Email ThisBlogThis!Share to TwitterShare to FacebookShare to Pinterest