Dear Mother Sheehan: Your 15 Minutes Are Up 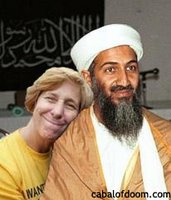 Cindy Sheehan, who lost a son in Iraq, garnered much deserved publicity for the antiwar movement last summer when she camped on the road to President Bush's Texas ranch to protest the Mess in Mesopotamia. But now Mother Sheehan has jumped the shark. (*)

In going from sympathetic pest to drivel spouter, she has become the latest but certainly not the first overnight celebrity to become an unwitting mouthpiece for others.

It's time for Cindy Sheehan's 15 minutes of fame to be over before she does even more damage to some of the worthy causes that she espouses.

While I don't agree with everything she says, Catherine Seipp takes Mother Sheehan down a few well deserved notches in a National Review Online commentary.

(*) Jumping the shark is a marvelous American pop cultural term originally applied to a TV series that has passed its peak and declined in quality. The phrase was first popularized by a TV critic when Arthur "Fonzie" Fonzarelli literally jumps a shark on water skis on "Happy Days." Mother Sheehan has jumped the shark because she has strayed far from her original premise.
Posted by Shaun Mullen at 12:19 AM
Email ThisBlogThis!Share to TwitterShare to FacebookShare to Pinterest