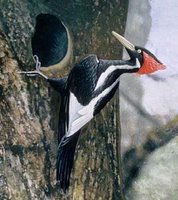 The debate over whether the ivory-billed woodpecker has indeed been rediscovered is getting a bit tetchy.

A search of the swamps of eastern Arkansas over the winter failed to turn up new confirmed sightings or new clues as to the magnificent bird's existence following an apparent sighting in February 2004. Researchers claimed they later made videotape and audio recordings of the bird, one of six North American bird species thought to have become extinct since 1880.

Some experts have challenged whether the bird was actually spotted.

David A. Sibley, the famous bird illustrator, wrote earlier this year the video is not good enough to see the white stripes on the bird's back that would prove it is ivory-billed.

CNN has more here.
Posted by Shaun Mullen at 3:34 AM
Email ThisBlogThis!Share to TwitterShare to FacebookShare to Pinterest