Why George Bush Is Unfit to Be President 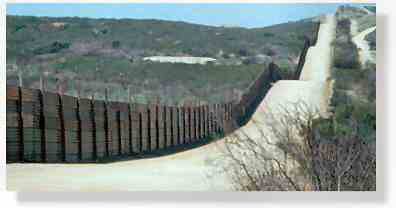 As if we needed further proof that the Bush administration is dangerous to the national health, now comes its "solution" to the long festering immigration problem: Send in the troops.

There are several very big problems with this:

It militarizes the U.S.'s southern border.

It further stresses National Guard units already depleted because of repeated tours of duty in Iraq. We're taking about 6,000 troops along a 700 mile border.

What's wrong with the Border Patrol? Have we yet another dysfunctional government entity in the War on Terror? If so, why has it taken nearly five years to address this problem? (And recall that homeland security czar Michael Chertoff has said that using the Guard to supplant the Border Patrol would be unrealistically expensive and very difficult.)

It plays to the basest elements -- the people who think Latin Americans are inferior and want to criminalize the mere act of their trying to emigrate to the U.S.

It heightens tensions between the U.S. and Mexico.

Unless the troops will be armed with squirt guns, it will only be a matter of time before people die.

Finally, it sends a message of futility:

Urged repeatedly to act decisively on immigration, Congress dithered and couldn't reach an accomodation with a White House that ignored it for years and it now in turn ignores. Rather than confront a pressing issue, it passed the buck.

The president picked up the buck and in an effort to create the illusion of decisiveness, is calling out the Marines . . . er, National Guard, to scapegoat a bunch of poor peasants.

The president's speech last night went over well in the heatland, according to overnight polls. Yes, he tried to salve moderates by again endorsing proposals that would give many illegal immigrants a chance to become legal and eventually gain citizenship, but those proposals are DOA this political season.

The New York Times summed things up nicely in an editorial:

President Bush's speech . . . was not a blueprint for comprehensive immigration reform. It was a victory for the fear-stricken fringe of the debate.

These are the people who say illegal border crossings must be stopped immediately, with military boots in the desert sand. Never mind the overwhelming burdens of Iraq and Afghanistan, the absence of a coherent and balanced immigration policy, and the broad public support for a comprehensive solution. America must send its overtaxed troops to the border right now, they say, so a swarm of ruthless, visa-less workers cannot bury our way of life under a relentless onslaught of hard work.

Ahem. Or, as they say in Spanish, ay yai yai.
Posted by Shaun Mullen at 4:03 AM
Email ThisBlogThis!Share to TwitterShare to FacebookShare to Pinterest