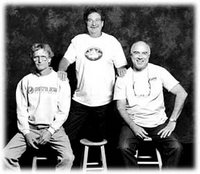 I never knew that Ramrod's real name was Lawrence Shurtliff. Most folks didn't although he was a roadie for the Grateful Dead for nearly 30 years.

I met Ramrod (at the far left in this recent photo with fellow roadies Steve Parish and Robbie Taylor) through Dan Healy, the band's longtime sound guru. Having given me the once over -- as Ramrod did to anyone lurking backstage whom he didn't know -- I was more or less treated as family when I traveled in the band's wake in the mid- to late-1970s.

If Ramrod didn't like your looks or approve of your manner, his laser-like stare, arms on hips, was enough to drive even the meanest Hell's Angel back through the stage door. I never saw him resort to violence (some roadies used to think nothing of throwing you into the audience) and once saw him gently take an electric-eyed groupie by the hand and escort her to the first aid tent after she climbed onto the stage and hugged guitarist Jerry Garcia in mid-song.

Then there was a New Year's Eve show when percussionist Micky Hart said he was too high play. Ramrod solved the problem by strapping Hart to his drum stool with gaffer's tape.

WHAT A LONG STRANGE TRIP

Ramrod joined the Dead in 1967 as truck driver and was held in such high regard by its large family that he was named president of the band's board of directors when the group incorporated in the 1970s. It was a position he held until Garcia's death in 1995. Like the rest of the band's few remaining staff, he was laid off last year.

A lifelong cigarette smoker, he was diagnosed with lung cancer only a few weeks ago. He didn't want anybody to know he was dying, although band and crew members visited him daily.

Guitarist Bob Weir said he could barely remember the Dead before Ramrod.

When he did join up, it was like he had always been there. I won't say he was the missing piece, because I don't think he was missing. He just wasn't there. But then he was there. And he always will be. He was a huge part of what the Grateful Dead was about.

Most never knew his given name.
They called him Ramrod.

He came down from ,
Prankster sidekick of Cassady,
Kesey and the merry crew,
a silent stoic in a vocable milieu
his heart was stolen by the Grateful Dead.

A country boy, not given to complexity,
his crowning gift was loyalty
for which he was loved more than
the common run of men by friends.This is not to say more than was so,
the common fault of eulogies
which shine the silver of modest virtue
into the gold of rareness.

Every soul owes life a death.

Between each heartbeat is a moment
within which the pulse is still. In the longer beat between life and death
a man was here we called a friend,
a father, a husband and a son. He is us and we are him,
his death is ours, our lives are his. Some see Heaven as dying's recompense,
some acknowledge only nothingness
in a space we know not of,
in a place we know not where. But this we know, as a poet said:
"To have been here but the once
Never can be undone." Some will pray, some just remember.

Those who pray, having prayed,
will go on to pray for others. Those who remember,
having remembered for awhile,
will in the course of time forget,
more so as the years dissolve. This is as it should be
lest death overstep its bounds
and impinge too much on life.

Life, being what is, cannot
impinge too much on death. The circumstance we most desire
in grief which shakes our branches
like some holy hurricane raging
through this barren world of little light,
is that our brother be gathered in glory.If so, rejoice! If wishful thinking,
give thanks instead
that he was here among us.

Delivered from the testing fire of pain,
a truer heart was never broken.

Posted by Shaun Mullen at 1:40 PM
Email ThisBlogThis!Share to TwitterShare to FacebookShare to Pinterest