Karl Rove: Still In the Crosshairs. Or Not. 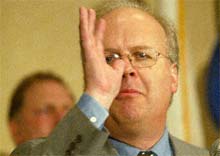 Kiko's House, along with many other blogs and a few media outlets, reported breathlessly last week that the indictment of Karl Rove was imminent.

This was based on what seemed to be a well sourced story by Jason Leopold at TruthOut.org. that included information that Special Prosecutor Patrick Fitzgerald had met with Rove's legal team for five hours on May 12.

* He has poured more gasoline on the fire by posting a detailed account well beyond Leopold's story of what TruthOut has been told. This includes incendiary information that:

Rove may be turning state's evidence. We suspect that the scope of Fitzgerald's investigation may have broadened -- clearly to Cheney -- and according to one "off the record source" to individuals and events not directly related to the outing of CIA operative Valerie Plame. We believe that the indictment which does exist against Karl Rove is sealed. Finally, we believe that there is currently a great deal of activity in the Plame investigation.

(Warning: TruthOut's website was overwhelmed when I posted the above. Go to TalkLeft here if that's still the case.)

* However, Ash also has this to say of Leopold's story:

The time has now come . . . to issue a partial apology to our readership for this story. While we paid very careful attention to the sourcing on this story, we erred in getting too far out in front of the news cycle. In moving as quickly as we did, we caused more confusion than clarity. And that was a disservice to our readership and we regret it.

As such, we will be taking the wait-and-see approach for the time being.


Robert Luskin, Karl Rove's lawyer, says he spent most of the day on May 12 taking his cat to the veterinarian and having a technician fix his computer at home.

He was stunned, therefore, when journalists started calling to ask about an online report that he had spent half the day at his law office, negotiating with Patrick Fitzgerald -- and that the special prosecutor had secretly obtained an indictment of Rove.

The cat's medical tests, Luskin says, found that "the stools were free of harmful parasites, which is more than I can say for this case."

Andrew Sullivan bursts the Rove bubble at The Daily Dish:

The guy's supposed to be a genius, but if he were so smart wouldn't he have foreseen that embracing divisivess and extremism would come back to bite him and his party in the ass? For that matter, what about the intelligence (or lack thereof) involved in the prosecution of the war and its aftermath? If I had wanted to assure a "permanent Republican majority" I would have done everything possible to assure that the war was a complete and unquestionable success. But clearly they planned it on the cheap and with lack of forethought. Is this just stupidity? Hubris? Once again, if Rove was such a genius, wouldn't he have done his part to make sure that the President and his policies were as certain as possible of success? Imagine, if you will, what a lock on power the GOP would now have if the war had been done right.

Posted by Shaun Mullen at 4:32 AM
Email ThisBlogThis!Share to TwitterShare to FacebookShare to Pinterest