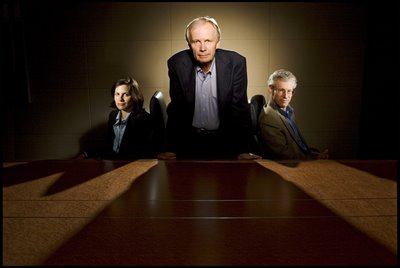 I rarely blog about my former incarnation as an editor and reporter. Much of what transpires in the rarified air of newsrooms has little consequence for the Average Jane, although too many journalists would beg to differ because they have been breathing that air for so long.

Some 21 years of my life's work was spent at the Philadelphia Daily News, a feisty tabloid and sister paper of the Philadelphia Inquirer. During those two decades, the papers won a combined 19 Pulitzer Prizes and in their own rather different ways exemplified the best in journalism.

The Inky covered the world with a savoire-faire that earned it the lion's share of those Pulitzers, while the Daily News covered Philadelphia in a way that was so intimate and so street smart that editors from out-of-town papers flocked to its newsroom to try to understand -- and emulate -- why it had such a deep bond with its readers.

Both papers made money. In the Inky's case, buckets and buckets of money. But this wasn't enough for a self-aggrandizing asshole by the name of Anthony "Tony" Ridder, chief executive of Knight Ridder, the newspaper chain that owned them.

Knight Ridder was a big reason why I returned to newspaper work after a three-year hiatus bending nails (ie., doing carpentry work).

Back in the day, Knight Ridder was the class of U.S. newspaper chains because of its commitment to excellence. That hasn't necessarily changed. But at some point the balance between having well-resourced newsrooms and keeping Knight Ridder's stock price up tipped in the direction of Wall Street, and Ridder was the tipper in chief.

Ridder said two things during my two decades-plus in Philadelphia that best exemplify why he became the Darth Vader of an industry that trashed newspapers although they were in decent financial health, remained viable investments and vital players in their communities.

So that it could be closer to the Internet.

Then he had this to say when the Inky won multiple Pulitzers in 1987:

I'd like to see it win a Pulitzer for cost-cutting.

Ridder, with the acquiesence of his Tweedledum board of directors, slowly bled the Daily News and Inky. Although there was not a direct cause-and-effect relationship, the circulations of both papers went into precipitous declines.

Ridder put Knight Ridder on the auction block late last year, and after numerous machinations, the now considerably leaner Inky and anorexic Daily News have been saved by a group led by a Philly public relations guy, meaning that the papers will be locally owned for the first time in decades.

That might seem like a good thing, but the buyers have zero publishing experience and while they promise to keep their mitts off of the editorial content and have even signed so-called "no interference" pledges, I'm taking a wait-and-see attitude for two very good reasons:

First, the head of the buyer's group is a conservative Roman Catholic Republican who has been outspokenly and unfairly critical of the papers over the years, notably over their stories on the feckless Philadelphia Catholic Archdiocese and its serial cover-up of pedophile priests, while the Inky is liberal and the Daily News even farther to the left.

Second, the Law of Uninteded Consequences has not been repealed.

Anyhow, the deal was closed on Tuesday afternoon and I wish everyone well. But be that as it may, in the end Ridder's slash-and-burn strategy prevailed even if there appears to have been a happy ending for the Philadelphia papers.

As David Carr puts it in a New York Times column:

He got his wish, with round after round of cuts, but lost control of the papers in an effort to satisfy Wall Street. Fewer reporters and a smaller amount of space for news stories does not generally attract new readers or new revenue. Perhaps Mr. Ridder can use some of his $9.4 million severance to fund a study on the demise of the American daily newspaper.

On behalf of the many fine men and women with whom I worked, I say:

Screw you, Tony Ridder. And you can quote me on that.

Posted by Shaun Mullen at 4:26 AM
Email ThisBlogThis!Share to TwitterShare to FacebookShare to Pinterest

As a former Philly Daily News reporter, I totally agree with you, Shaun.
My big hope - other than editorial independence - for the new owners of the DN and the Inky is that the DN gets to hire at least 20 people. The staffing level is absurd and, with less than 100 people, is well under industry standards. I still have many great friends there who are also great journalists and are teetering on the edge of burn out because they're doing four jobs and being paid for one.

I do hope the PI and PDN come out of this and get stronger. I'm from South Jersey and read a lot of both of them (plus the Bulletin, remember that?). Even now, when I visit my parents, I enjoy a peek at the Sunday Inquirer (which my dad calls his "real paper").

I hope someone out there has the sense to stick with print reporting, because I think there will be an audience -- at least for sometime -- that does not want to strain its eyes 24/7 over a monitor.

I got here from Joe Gandelman's, The Moderate Voice and have linked to this post.

In lieu of trackback.