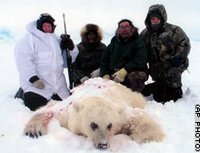 The first documented case of a hybrid grizzly-polar bear in the wild has been confirmed.

Zoologists and big game hunters have thought for years that there were such mixes, but that was not confirmed until Roger Kuptana, an Inuit tracker from the Northwest Territories, noticed last month that the American hunter he was guiding had shot a bear that had brown patched in its white fur and the black ringed eyes, long claws and slightly indented face and humped back of a grizzly.

Territorial officials seized the creature's body and a DNA test has confirmed that the hybrid was born of a polar mother and grizzly father.

Posted by Shaun Mullen at 4:28 AM
Email ThisBlogThis!Share to TwitterShare to FacebookShare to Pinterest