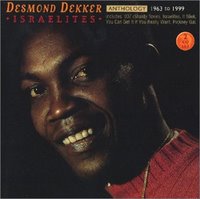 Word comes that Desmond Dekker died of a heart attack at his home in Surrey, England on Thursday. This is uncannily eerie, because I had recently been feeding my roots reggae habit by listening to a couple of Dekker disks.

"Israelites," an anthem to the downtrodden co-written by Dekker and Leslie Kong and recorded in 1968 by Desmond Dekker and The Aces, was the first international hit by a Jamaican and introduced the world to reggae, a soulfully rhythmic musical form that grew out of ska.

Said Dekker of the song in a 2005 interview:

It's about how hard things were for a lot of people in Jamaica -- downtrodden, like the Israelites that led Moses to the Promised Land. I was really saying, don't give up, things will get better if you just hold out long enough.

Born Desmond Adolphus Dacres and orphaned in his early teens, Dekker's most prolific period was the 1960s when he recorded one hit after another in Jamaica, including "Honour Your Father and Mother," "Sinners Come Home" and "Labour for Learning."

Dekker's songs were polite and conveyed respectable mainstream messages until 1967 when his songs became edgier and began glamorizing the violent rude boy culture then popular in Jamaica. "007 (Shantytown)" typified the change and the song was a hit in the U.K.

He moved to the U.K. in the 1970s and recorded relatively little over the next 20 years, although his career briefly revived in 1990 when Maxell used "Israelites" as the soundtrack for a TV commercial for its cassette tapes.

He remained popular in Europe and still toured occasionally. His last show was at Leeds University earlier this month and he was scheduled to perform in Prague next week.

While Dekker never attained the fame of Bob Marley or Peter Tosh, he was an equally bright light in the reggae firmament and a trailblazer for both of those international stars. He was 64.
Posted by Shaun Mullen at 7:47 AM
Email ThisBlogThis!Share to TwitterShare to FacebookShare to Pinterest